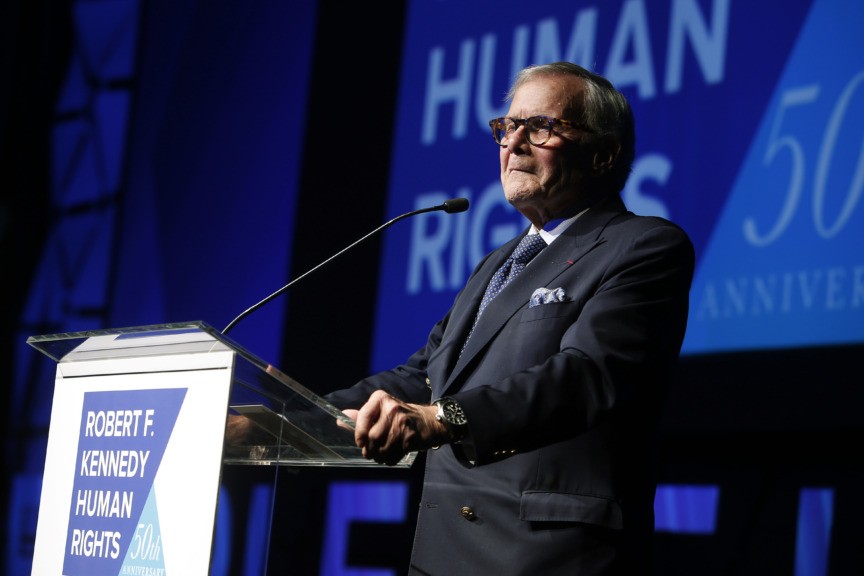 On Sunday’s Meet The Press, after claiming that Republicans do not want “brown grandbabies,” Brokaw said that he has long held the belief that Hispanics need to assimilate more.

“I also happen to believe that the Hispanics should work harder at assimilation. That’s one of the things I’ve been saying for a long time,” Brokaw said. “You know, they ought not to be just codified in their communities but make sure that all their kids are learning to speak English, and that they feel comfortable in the communities. And that’s going to take outreach on both sides, frankly.”

“We as a community are creating the new America right before your very eyes, Mr. Brokaw. Sorry if it doesn’t fit your perceptions of what America should be like,” Latino Rebels wrote. “That future is bilingual, bicultural, at times in English, other times in Spanish. Our community is defining this future. Not you.”

Other activists ripped Brokaw for his “racism,” “ignorance,” and “xenophobia.”

Brokaw later apologized, saying he was “truly sorry” that his remarks offended after first tweeting that he felt terrible that his comments on Hispanics had offended “some members of that proud culture.”

.@tombrokaw gave his best Gran Torino impression today, saying “Hispanics need to work harder to assimilate” and “make sure that all their kids are learning to speak English”. Someone please help this man to his car.

Unless @MeetThePress is trying to compete with @foxandfriends, its time for @NBCNews to take a hard look at their bookings.

I don’t know if it’s old age, racism or just ignorance (or all of the above), but @tombrokaw comments today were unacceptable and @NBCNews @MeetThePress should absolutely refute.

So disappointing to see that level of ignorance and xenophobia on such an important platform. https://t.co/noZv9Qnqx4

Brokaw comments on @MeetThePress are basura 🚮. As brown Americans, we dont need to defend our language fluency or all the many ways we show up in our fullness as Latinx people. The assimilation charge is about control and oppression. It gives license to people’s white supremacy.

1st problem with @MeetThePress: the @tombrokaw grotesque assertion that Hispanics don’t want to assimilate. 2nd problem: this false statement goes unchallenged b/c there is no Latinx voice on a discussion about immigration.

1) To clarify, we speak English and a lot of us also can speak Spanish too. Proudly. In fact, studies have shown that Hispanic immigrants have an especially high commitment to learn English.

3) The Latino community does not need a lecture about assimilation. Instead, let’s celebrate the wonderful new things that Hispanics/Latinx are contributing to the fabric of American society.

It would really help if more people on these panels were Latinos. I am so tired of people talking about us like we only exist in the abstract. We are right here! We’ve been here since before this land was called the United States. https://t.co/oi5ySTqOLI

You’re telling us we’re lousy at assimilating when apparently you can’t even bother with punctuation and capitalization, log off dude. https://t.co/0PA0jUbMbQ

Guess what @tombrokaw: this Mexican’s English is good enough to know this is not an apology. Also, don’t you dare use Cesar Chavez to hide your bigoted comments behind. https://t.co/1gmsDDTcZX

A perfect example of where America is currently: White person says something racist. It’s ignored by all other the “well meaning” whites at the table. Until a black woman has the courage speak out…. https://t.co/6qulYAkA38

But with that said, what @tombrokaw said on national TV today was hard to watch and absorb. It really was a punch in the gut to a lot of people. It was not only factually incorrect, it was also xenophobia in action. Hope @MeetThePress addresses this.

.@tombrokaw‘s comments give credence to white supremacist ideology and are not rooted in reality. They have no place in our political discourse.

We call on Tom Brokaw to apologize. Not because we’re offended. Because he should be sorry to have said it at all. pic.twitter.com/rJDLiTrNT9