Some of Latin America’s most prominent musicians and celebrities released a video this weekend condemning the socialist dictatorship of Nicolás Maduro in Venezuela and urging the world to unite in solidarity with the Venezuelan people.

The video is the most organized effort so far this year from the Spanish-language entertainment establishment to support the movement against Maduro’s repressive regime, following statements from some of the most popular Hispanic celebrities today raising awareness for the victims of socialism.

Their solidarity against Maduro contrasts sharply with voices in Hollywood that have long supported Maduro and his predecessor Hugo Chávez – many of whom have remained silent in the face of the opposition invoking a constitutional requirement to replace Maduro following the end of his presidential term in January.

The video released Friday is an effort led by Spanish singer-songwriter Alejandro Sanz, who has increasingly used his social media account to call for action against Maduro. Sanz captioned the video, “Today we walk together, today we are more, today we are #Venezuela,” and appears in it stating that Venezuelans preparing to protest against Maduro on Saturday have the backing of the entire regional community.

Alongside Sanz, one of the most successful musical acts of the last two decades, appear several musicians who have succeeded in breaking into the U.S. market, as well. Luis Fonsi, half of the duo responsible for the 2017 hit “Despacito,” appears in the video telling the Venezuelan people, “you are not alone” and praising them as “an example of strength, union, and struggle.”

J Balvin – arguably the most successful reggaeton artist of the moment, enjoying crossover hits with Beyoncé and Cardi B – appears in the video urging Venezuelans to keep protesting against Maduro. “The path to freedom begins by letting go of fear, and you have all let that go already,” he says.

Puerto Rican artist Tommy Torres offers the clearest political message of the video, stating, “we are here in total support of the transition process” from Maduro to interim President Juan Guaidó.

Other notable artists in the video include Spanish musician Miguel Bosé, the Colombian artist Juanes, and one of the few Venezuelans in the video, singer-songwriter Ricardo Montaner.

President Guaidó took office on January 23 citing Articles 333 and 350 of the Venezuelan constitution, which require the Venezuelan people to disavow a head of state that disrupts the democratic order or violates human rights, both of which Maduro has done. Most of Latin America and dozens of countries around the world, including the United States, have recognized Guaidó as the legitimate president of Venezuela and refused to deal with Maduro and his government representatives.

Guaidó’s first act as president was to request international humanitarian aid for the Venezuelan people, who suffer from severe malnutrition and have no access to nearly every medication the World Health Organization (WHO) considers vital for a functional health care system. Maduro has repeatedly rejected humanitarian aid, arguing that the United States would hide soldiers in aid convoys to invade and colonize the country.

On Saturday, Guaidó called Venezuelans to the streets to demand that the Venezuelan military, most of which is still loyal to Maduro, allow humanitarian aid to enter the country. Rallies nationwide attracted thousands.

#Venezuela 🇻: thousands are marching through the streets of #Acarigua (#Portuguesa state) to demand the end of #Maduro. #2Feb pic.twitter.com/uoomhkcTp1

The Alejandro Sanz Instagram video follows weeks of statements of solidarity for the Venezuelan people from some of the Latin entertainment industry’s brightest stars. The world of reggaeton, the dance genre popularized in the English-speaking United States by “Despacito,” has been particularly present in supporting Venezuela. In addition to the aforementioned Balvin and Fonsi, artists like Maluma, Nicky Jam, and Don Omar issued statements in support of Guaidó last week.

Daddy Yankee, considered the flagship breakthrough artist of the genre for both his 2005 hit “Gasolina” and “Despacito,” has been condemning the Maduro regime for years. Yankee and Fonsi were forced to take a stand in 2017 when Maduro released a remixed version of “Despacito” with lyrics promoting socialism.

“That you illegally appropriated a song does not compare with the crime you commit and have committed in Venezuela,” Yankee said in a response that year. “The dictatorial regime is a mockery, not only for my Venezuelan brothers and sisters, but for the whole world.”

The English-speaking celebrity world, with the notable exception of Jared Leto’s 2014 anti-Maduro speech at the Academy Awards, has been notably more silent on the issue, despite the vocal support for the socialist regime out of leftist Hollywood staples like Sean Penn, Danny Glover, and Oliver Stone.

Actors Jamie Foxx and Lukas Haas meet with Venezuelan dictator Nicolás Maduro and his wife, lawmaker Cilia Flores, in 2016. The actors held a private meeting with Maduro during a visit to Caracas to tour the socialist regime’s film and television studio Fundación Villa del Cine. 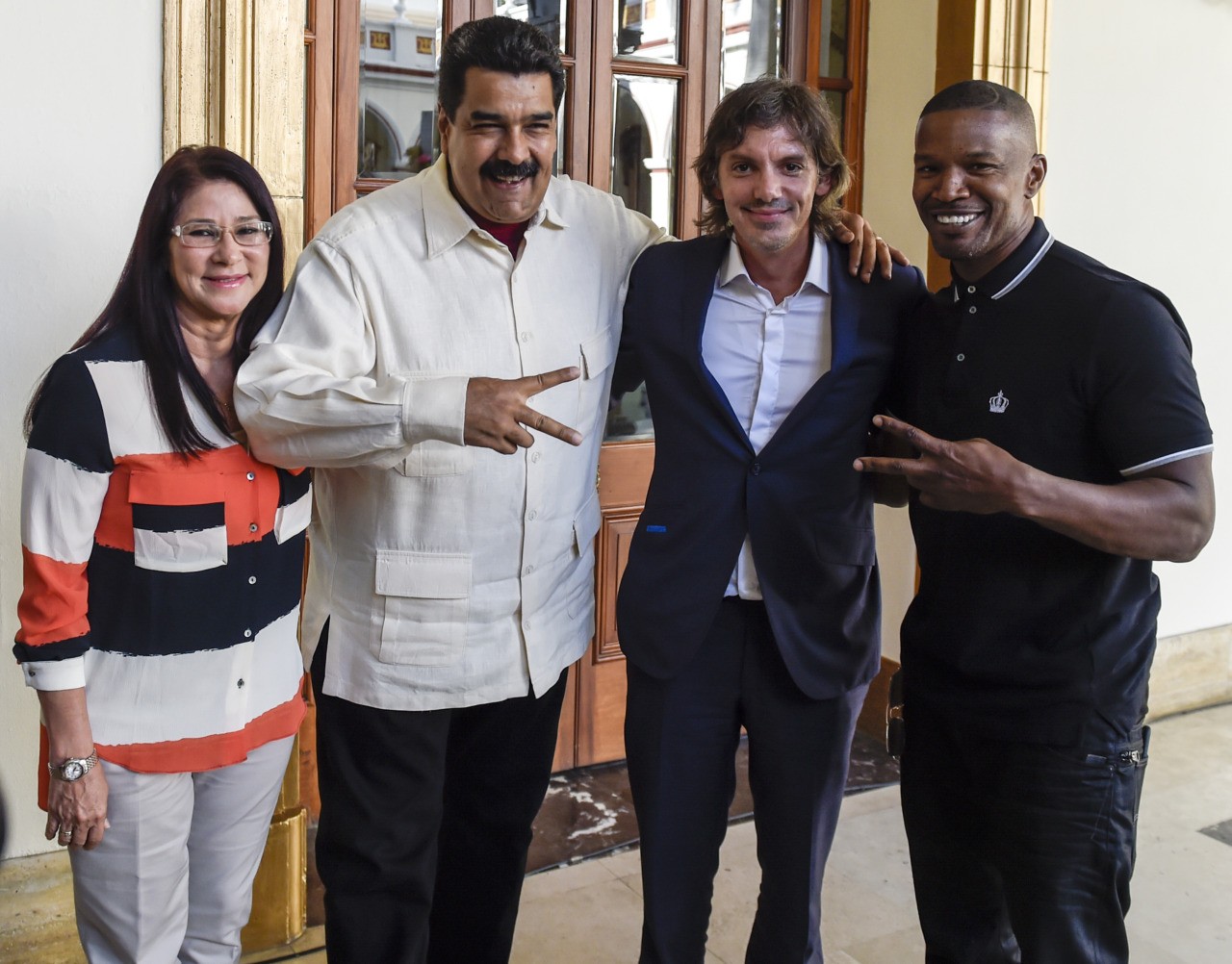 Glover, who condemned Leto for calling for freedom in Venezuela that year, referred to dictator Chávez as “my brother” and a “great man” upon his death in 2013. Penn appeared on Chávez’s television program, Aló Presidente, and repeatedly applauded his mass nationalization of businesses and silencing of dissidents as “incredible things” he did “for the 80 percent of the people that are very poor there.”

Neither actor has made public comments about President Guaidó since his inauguration.