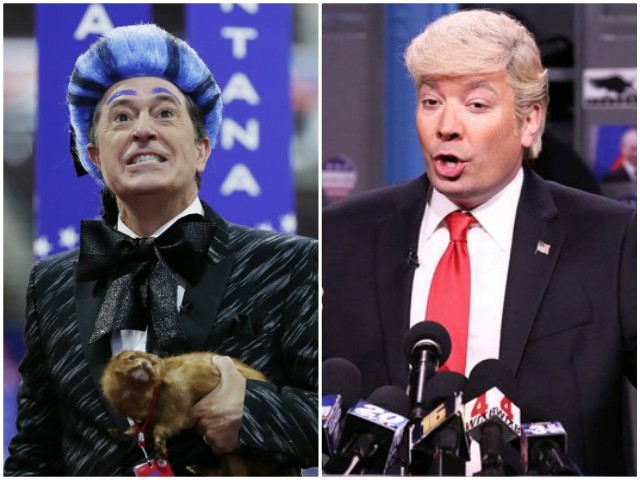 Late-night talk show host melted down in response to President Donald Trump’s State of the Union address on Tuesday and mocked his appearance and deployed so-called fact checks on many of his claims.

The president’s spseech focused on a range of issues, including the strength of America, illegal immigration, late-term abortions, and his administration’s foreign policy. A CNN poll released after the address found that 59 percent had a “very positive” reaction. Elsewhere, a CBS News poll showed a whopping 72 percent of speech watchers approved of Trump’s immigration agenda. Another 76 percent approved of his speech overall.

But left-wing late-night hosts reacted with scorn and hate.

“This was not a particularly great speech,” said Late Show host Stephen Colbert. “But what it lacked in quality it made up in length. This speech was like watching paint lie.”

Colbert also mocked Democratic Speaker of the House Nancy Pelosi, who sat behind Trump for the duration of the speech and even clapped (perhaps sarcastically) at the end.

“She showed great restraint,” Colbert said. “She did not stick out her tongue once. She was chewing on it for a while, but did not stick it out.”

Over on The Daily Show, Trevor Noah made light of Trump’s warnings about the presence of drug cartels and criminal gangs such as MS-13 as a consequence of illegal immigration, while also mocking his use of a teleprompter.

“The real theme was that we’re all going to die, Mexican style,” Noah quipped. “This part of his speech was so scary he should have just done it with a flashlight under his chin.”

“We can all agree that he read really well,” he added. “I don’t know if he’s ready for a second term, but he’s definitely ready for the second grade.”

On Late Night, Seth Meyers began by mocking Trump’s “weirdly crooked tie,” and also attacked Trump’s criticism of the Mueller investigation and their impact on the country’s economy.

“Before Trump’s speech even started, we already had one big oops moment: Trump’s weirdly crooked tie,” he said “Look at that: Trump is so unpopular, even his tie has moved to the left.”

“I’m sorry, you think the investigations are hurting the economy? If anything, you’ve created thousands of jobs for lawyers,” he added.

“You all just witnessed the Super Bowl of State of the Union speeches,” Fallon said. “It had action, it had excitement, it had drama, the only thing it was missing was Adam Levine’s nipples.”

Fallon was then asked by a reporter how he thought his efforts fared.

“I was very, very, very fantastic tonight,” he responded. “I was clear, I was concise, I was articulate.”