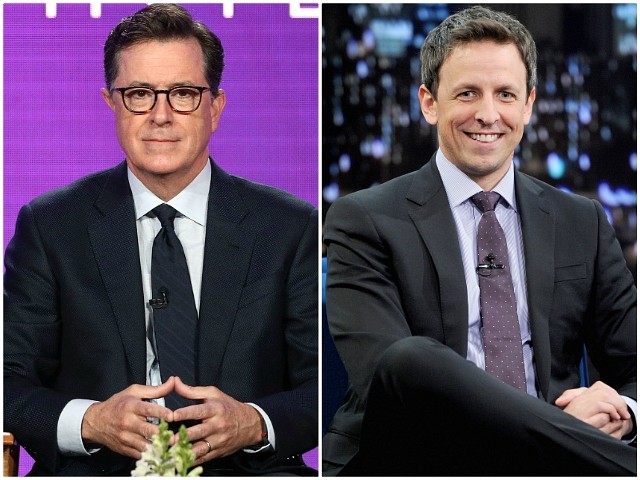 Left-wing late-night hosts criticized President Donald Trump over his response to the multiple mail bombs sent to prominent Democrats and left-wing figures on Wednesday after he retweeted Vice President Mike Pence’s condemnation of the events.

“I agree wholeheartedly!” Trump wrote in response to a tweet from Pence, who condemned the “cowardly” and “despicable” actions of the perpetrators, before pledging to bring those responsible to justice.

“First of all, we fact-checked that one and it doesn’t work out. You have no whole heart,” quipped Stephen Colbert of CBS’s Late Show. “Second, you’re the president. There’s been an attempted attack on two previous presidents today. This is the one time you can’t think of your own tweet?”

TONIGHT: Trump responds to the attempted bombings with his usual charm. #LSSC pic.twitter.com/GTITDCss7o

Over on NBC’s Late Night, Seth Meyers used his “A Closer Look” segment to compare Trump to a cheating school pupil.

“Hey man, you’re the president, you can’t just add your name to somebody else’s statement like your signing a get well soon card for a coworker,” Meyers said. “Trump is like a kid who tries to cheat off a classmate but instead of actually copying he just writes, ‘See Mike’s test for answers.’”

“The president, for once, said the right thing in response,” Kimmel said. “He said, ‘We have to come together and send one very clear, strong, unmistakable message that threats or acts of political violence have no place in the United States of America….except for at all of my rallies.’”

The Tonight Show‘s Jimmy Fallon also quipped that rather than CNN, Trump was most worried about whether Fox News had been targeted.

“When he heard that the president said, ‘Oh my God, is Fox News okay?’ he joked. “Out of precaution, President Trump evacuated himself to the golf course.”

Most late-night hosts seemed oblivious to the fact that President Donald Trump made his own statement condemning the attack.
“In these times, we have to unify, we have to come together, and send one very clear strong unmistakable message that acts and threats of political violence of any kind have no place in the United States of America,” Trump said. “This egregious conduct is abhorrent to everything we hold dear as Americans. We are extremely angry, upset, unhappy about what we witnessed this morning and we will get to the bottom of it.”