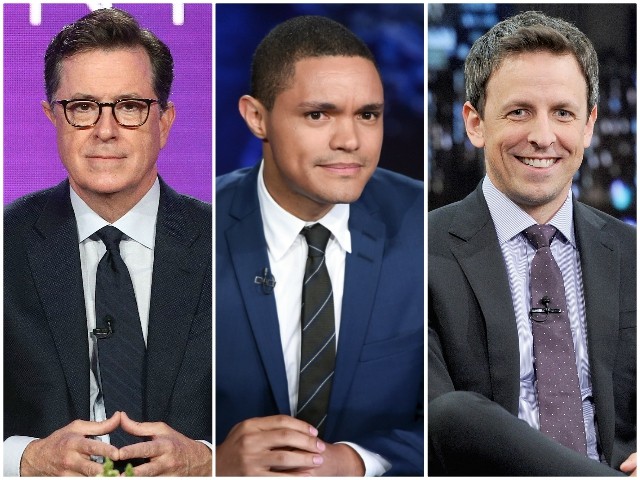 Late-night comedians ripped into President Donald Trump’s Supreme Court nominee Brett Kavanaugh on Thursday evening, while praising Dr. Christine Ford’s testimony as she alleged sexual assault at the hands of Kavanaugh from over 30 years ago.

On The Daily Show, Trevor Noah described the testimonies as “the only story anyone was talking about today,” before focusing in on a clip of Dr. Ford describing intricate parts of her brain.

“Oh snap! Oh! People were asking how ‘the lady’ can trust her brain, turns out she’s a brain scientist,” Noah said. “Those senators were probably like, ‘Oh yes, we’re also familiar with the hippopotamus. We all know that … let’s move on, let’s move on.”

He went on to attack Kavanaugh for being angry and emotional.

“I don’t know if he’s got something going on in his life, but he seemed really angry,” Noah said. “Good lord, this guy such an asshole he looked like he was auditioning for a Snickers commercial.”

The Late Show, Stephen Colbert suggested it had been “the most divisive day in America since Laurel and Yanny, if Yanny was trying to get on the Supreme Court and Laurel had some really disturbing stories to tell about him.”

“[Christine Ford] went first, and her testimony was deeply moving,” Colbert continued. “Don’t take my word for it, ask the liberal snowflakes over at Fox News.”

Over on Live!, Jimmy Kimmel said the hearings made for emotional television, while also praising Ford’s helpful demeanor.

“People were crying in front of their televisions so hard you’d have thought Milo Ventimiglia got killed by a crock pot,” he joked. “She was everything the Democrats hoped she would be. She was polite, likable and well-spoken. Maybe more than anything, it was striking to see someone questioned before the Senate who actually answered questions. I think that’s a first.”

Seth Meyers of Late Night also weighed in on Ford’s description of how the brain works.

“She’s in the middle of testifying in the intense glare of the national spotlight about an alleged sexual assault committed by a Supreme Court nominee and she just taught everyone how the brain works,” he quipped. “She gave a detailed anatomy of the hippocampus and the memory centers in the brain to a room of guys who look like they eat brains.”

Meyers also took issue with how Kavanaugh described the testimony as a “political hit.”

“Holy shit, I’m surprised he didn’t start attacking George Washington. ‘If he’s so honest, why does he wear a wig?’” Meyers joked. “Republicans always act like they’re in a slasher film and the killer around the corner is Hillary Clinton.”

The Tonight Show‘s Jimmy Fallon suggested that Trump realized “it wasn’t going well” while watching the testimony aboard Air Force One.

“Trump watched the hearing while flying on Air Force One,” he said. “You could tell it wasn’t going well because halfway through Trump tried to walk outside to get some air.”