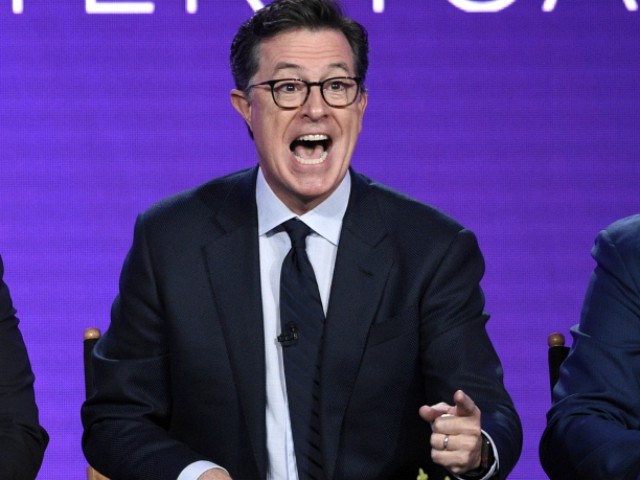 Late-night comedians mocked President Donald Trump’s speech at the United Nations on Tuesday, delighting in how the audience of global leaders laughed as Trump touted his accomplishments in office.

“In less than two years, my administration has accomplished more than almost any administration in the history of our country,” the president said as the audience began laughing. “So true. Didn’t expect that reaction, but that’s OK.”

On Late Show, Stephen Colbert quipped: “Don’t worry Mr. President, they’re not laughing at you. They’re laughing with each other at you.”

He also took aim at Trump for arriving late to the assembly, forcing Ecuadorian leader Lenin Moreno to replace him in the sequence of speeches.

“C’mon man, you’re from New York. You know what the traffic is like when the U.N. is here,” he said. “Just take the subway. I know it smells like pee, but rumor is you like that.” (Colbert was referring to reports of a so-called “pee tape” reported to date back to Trump’s stay in Moscow in 2013).

Over on Live!, Jimmy Kimmel compared the speech to “when your alcoholic uncle grabs the microphone at your wedding.” He also took issue with Trump’s complaint that the U.S. receives very little in exchange for foreign aid.

“Yeah! Where’s our foreign aid, Ethiopia? How about you share some of those lentils for a change?” Kimmel joked.

Back on Late Night, Seth Meyers also mocked the president’s claim that he had accomplished more than other presidents.

“That’s right, President Trump claimed that he has accomplished more than any other president in history, and world leaders in the audience laughed,” Meyers said. “Though technically they were still laughing from when he said, ‘Hello, I’m the president of the United States.’”

From tonight’s #LNSM: Trump was funny this morning, wasn’t he? 😂 pic.twitter.com/uyAqZtGRpb

“Halfway through the speech, everyone was begging to be deported,” he joked. “Trump hasn’t heard that much laughter since his night with Stormy Daniels.”

Conan O’Brien claimed the moment had left Trump “furious” because he had made some “foreigners happy.”

“At the UN today, President Trump told world leaders that his administration has accomplished more than any in US history, and the whole audience laughed,” he said. “Trump was furious because for a few seconds he accidentally made some foreigners happy.”

A few Hollywood celebrities joined in and piled on President Trump.

“To the nations of the world: Not only is our President one to be laughed at, he is to be reviled. He disgraces our country every day with his racism, his misogyny, his narcissism, and his ignorance. The majority of America apologizes. Nov.6 we will start a course correction,” Rob Reiner tweeted.

To the nations of the world: Not only is our President one to be laughed at, he is to be reviled. He disgraces our country every day with his racism, his misogyny, his narcissism, and his ignorance. The majority of America apologizes. Nov.6 we will start a course correction.

“This is only the beginning of the world openly mocking him. People are bored of his hackey and tired routines. They no longer amuse,” Judd Apatow fumed. “His lies are now obvious. His ignorance is always on parade. He is transparent. He is just a pure embarrassment. Register to vote.”

This is only the beginning of the world openly mocking him. People are bored of his hackey and tired routines. They no longer amuse.His lies are now obvious.His ignorance is always on parade. He is transparent.He is just a pure embarrassment. Register to vote. @WhenWeAllVote https://t.co/Ew9m3L0eT1

Several others joined in.

This is a world stage with an audience of educated, accomplished, and respected members from across the globe.

And they’re laughing at him. https://t.co/iGVnArtLyZ

Welp, I guess it’s not just the liberal media. When all your friends are telling you you’re an alcoholic… https://t.co/ywDhIRpk0I

The world just laughed at @realDonaldTrump and his horse shit. Stay tuned, they might go full “Showtime at the Apollo” on him.😂 https://t.co/nQPsRnynWE

We are literally a laughing stock. The Founding Fathers roll in their graves. I am heartbroken. https://t.co/K7JIZFFtcv

REMEMBER THE WHOLE WORLD LAUGHED AT YOU TODAY! pic.twitter.com/zgD8uCqBNL

MORTIFICATION R US!! They LAUGHED at our President today at the UN, when he claimed he had accomplished more than any other President in our history! I want to run and hide.

UNITED NATIONS — They laughed.
“On the planet’s biggest stage, with more than 100 world leaders gathered with their ministers, ambassadors and dignitaries -while news cameras from as many countries broadcast the speech in as many languages, they laughed.” https://t.co/k8m8AZebBd