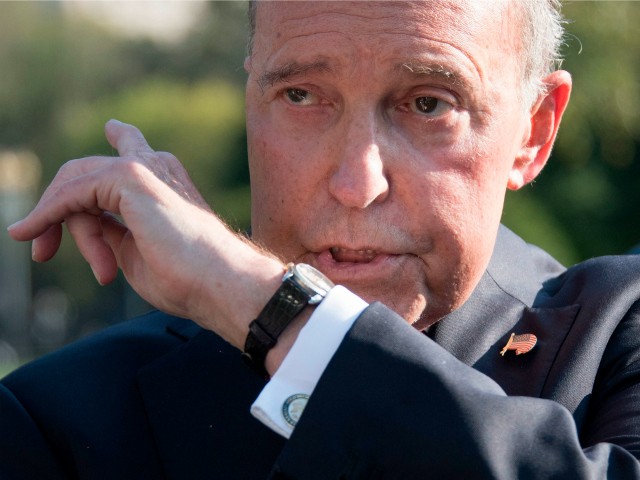 Kudlow told Breitbart News on a Monday press call that the timeline for this round of U.S.-China trade negotiations is going to move fast. He stressed that the credibility of the current discussion between the two nations will hinge on rapid movement. This is something the two sides discussed specifically at last week’s G20 Argentina meetings, including the meeting involving President Donald Trump and Chinese President Xi Jinping. He did not give a definitive timeline aside from indicating rapid movement.

He told the press on the conference call that China promised during the G20 meetings it would make changes on trade “immediately.”

“We have never had such broad-based detail” regarding trade negotiations, said Kudlow, who acknowledged that commitments are not a “trade deal.”

“This is new,” though, Kudlow emphasized. He defined these new communications as “broader and more detailed.” The two sides were communicating in the weeks leading up to the G20. Kudlow said there were “no promises but covered more ground than anything we’ve seen before.” He added that the Chinese put more on the table than the U.S. side had seen before.

Kudlow said he pressed China on its promise to make changes to tariff and non-tariff barriers “immediately.” The Chinese responded identifying Monday as its target. He said this commitment involved top deputies, and the U.S. team had never heard this level of commitment before. “We’ll see,” Kudlow said.

The director pointed to auto tariffs, various transactions, agriculture industry, licensing, and ownership as possible areas where the Chinese may announce these impending changes. He added that the two sides are close to agreements on IP theft and forced technology transfer of American technologies. These are front-burner topics on America’s list of required Chinese trade changes.

Kudlow remarked about his observation of a dinner meeting between Presidents Trump and Xi and their advisers. He said he observed the chemistry between the two leaders. President Trump promised President Xi the U.S. would hold off on raising U.S. tariffs on $200 billion in Chinese goods from 10 percent to 25 percent. The delay will start January 1 and last 90 days, pending further trade negotiations.

The director added his view that the whole world agrees with the U.S. about China, that it is not a developing country. Rather, it is developed and should be subject to the trade rules of the major leagues.