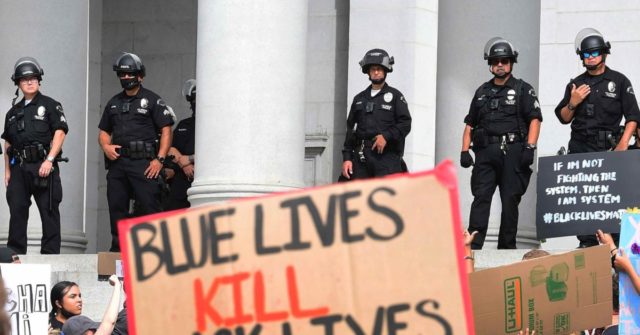 Morale within the Los Angeles Police Department (LAPD) is currently at a “record low,” thanks to the ongoing Black Lives Matter protests and the vilification of police by local politicians.

That was corroborated by a Breitbart News source within the LAPD, who said: “Morale across the rank-and-file is at a record low. Especially out on the street in patrol. We have been vilified and abandoned by the mayor, all but three of the city council members, as well as many business owners and residents of the city of Los Angeles.”

Mayor Eric Garcetti announced at the height of the riots in early June — with the National Guard on the streets — that he would be cutting the LAPD budget by up to $150 million, answering calls from activists to “defund the police.”

The following week, police officers learned they would not be paid overtime for the additional hours they spent on the streets calming the protests and riots.

The result: many police have effectively given up fighting crime.

“The citizens think crime and homelessness is bad now? They have seen nothing yet,” the LAPD source told Breitbart News. “Wait till a couple of months go by. Pro-activity is all but gone. It sucks. But the community has allowed cops to be vilified.

“When there is blood in the streets, due to a drastic increase of out-of-control violent crime? Then all the people, including businesses who have turned their backs on cops, will learn of the mistake they made on selling us out!

“With all the criminals getting out of jail, people will be at the mercy of the violent criminals. But that’s what the masses have asked for.

“The City’s Guard Dog will not be beaten any longer.”

The collapse in morale happened suddenly, and after a generation of progress.

The riots that erupted in 1992 after the acquittal of officers who beat Rodney King had marked the previous low for the LAPD.

But decades of reform, including close work with civil rights lawyers, led to dramatic improvements in relationships between the police and the public.

National Public Radio reported in 2012: “The detente is not perfect — there are still police-community confrontations. But there seems to be more willingness to listen on both sides.”

Now, however, that hard work has largely been forgotten. And police feel abandoned.

“Cops are retiring and looking to leave ASAP. Why put our families through this garbage for an ungrateful public,” the LAPD source told Breitbart News.

“We can go to jail for simply doing our jobs. It’s simply not worth it any longer.”

Harris told CBS Los Angeles: “I had one officer tell me that he feels like a Vietnam soldier returning home to a country that hates him, and that’s not a good place to be.”