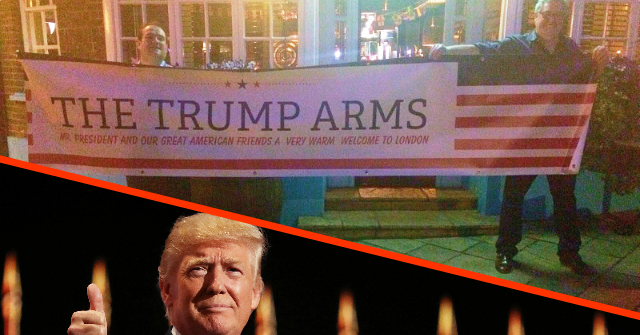 President Donald Trump’s state visit to the U.K. is his second trip to London and the second time a local pub landlord has marked the occasion by renaming his establishment Trump Arms.

In July of 2018, Damien Smyth, who runs the Jameson pub, renamed it for Trump’s visit and pulled out all the stops to welcome the U.S. president and surround fans who frequent the business with Trump memorabilia.

Despite the media’s focus on anti-Trump protesters who not only dislike the president but have also recalled his first visit by relaunching the vulgar and disrespectful Trump “baby blimp,” Trump is popular with a lot of Londoners.

ABC reported that Trump told the Sun newspaper that the pub being renamed in his honor was “wonderful.”

“I love those people,” Trump told the newspaper. “Those are my people.”

“That quote is plastered along the walls of The Trump Arms, as well as numerous American flags, pictures of Trum, and a replica ‘Oval Office,’ where attendees can enjoy a drink while seated across from an image of Trump displayed on the wall,” ABC reported.

“We did it last year when President Trump visited the U.K.,” Smyth told ABC News.”We must mark the great relationship between the British, the Irish, and the American people.”

“Renaming his pub is a show of ‘respect’ for the office of the presidency, he said and celebrates a trans-Atlantic bond that, for Smyth, hearkens back to the Second World War,” ABC reported.

“They had no qualms about helping this country or the country next door,” he said. “It’s about showing respect. The Americans, the Irish, and the British are great friends, and now we’re family.”

Smyth spoke to Breitbart London on the occasion of Trump’s first visit.

“We’re the greatest friends in the world and natural buddies,” said Smyth, who hails from Ireland and is married to a New Yorker.

“We want to show solidarity. We want to thank Trump for making the world safe again.”

Smyth said that he wanted to make sure the president knew that Britons “are not all crazy protesters” and talked of the important history of the United States and the United Kingdom as allies.