As Breitbart News reported, West posted to his Instagram account a photo of himself rocking his red MAGA hat with a message of support for Trump and his economic nationalist agenda.

“This represents good and becoming whole again,” West wrote of the MAGA hat. “We will no longer outsource to other countries. We build factories here in America and create jobs.”

West made the statement after making a pro-Trump performance on Saturday Night Live, ranting about the Democratic Party’s pro-welfare, anti-nuclear family policies.

In response, Lana Del Rey commented on West’s Instagram post, claiming he needed “an intervention,” as well as Trump, and also called he and the president “narcissists” with “Delusions of Grandeur.” 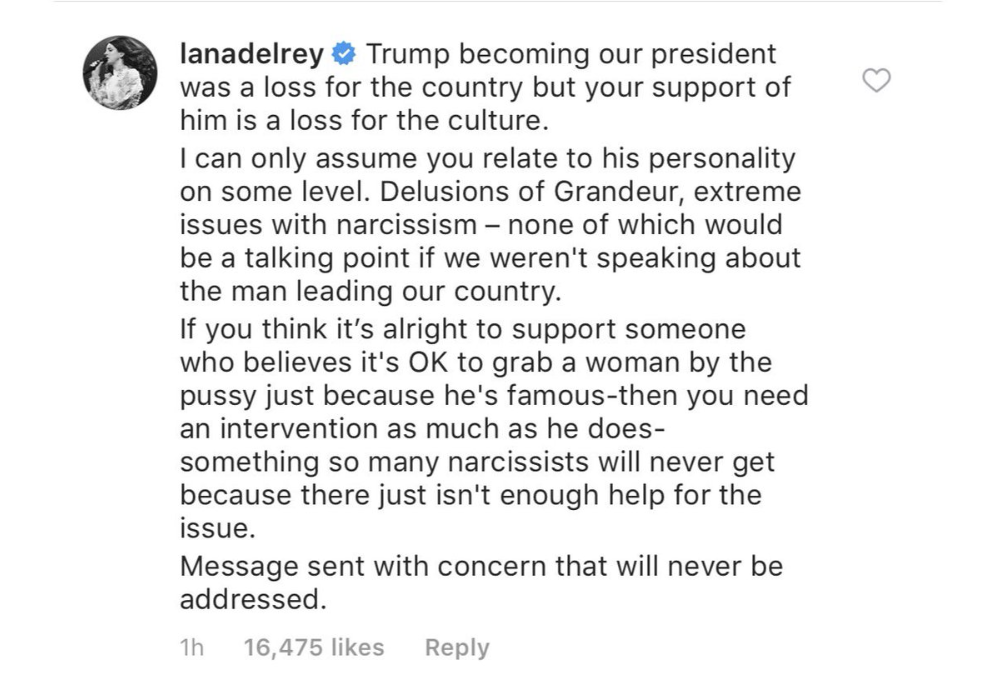 “Trump becoming our president was a loss for the country but your support of him is a loss for the culture,” Lana Del Rey wrote. “I can only assume you relate to his personality on some level,” she wrote in response to his Instagram post. “Delusions of Grandeur, extreme issues with narcissism — none of which would be a talking point if we weren’t speaking about the man leading our country.”

“If you think it’s alright to support someone who believes it’s OK to grab women by the pussy just because he’s famous then you need an intervention as much as he does, something so many narcissists will never get because there just isn’t enough help for the issue,” Lana Del Rey continued. “Message sent with concern that will never be addressed.”

The criticism from the “Born to Die” singer is a significant betrayal to West, as the two had previously developed a friendship after Lana Del Rey performed at West and Kim Kardashian’s wedding in France.