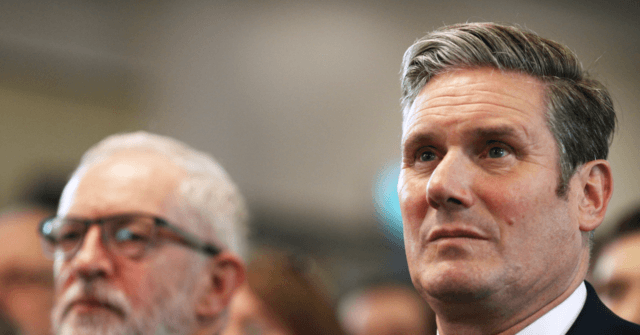 Labour MP Rosie Duffield warned she may defect as she said that her party leader, Sir Keir Starmer, is as bad as his predecessor, Jeremy Corbyn, in regards to protecting MPs from far-left extremists.

Rosie Duffield has accused Sir Keir Starmer – who has seemingly attempted to make the Labour Party more moderate since he became leader in 2020 – of neglecting his role of protecting Labour MPs from far-left extremist attacks.

The Labour MP says as a result of the abuse she has experienced from far-left activists associated with Labour for defending women’s rights, she has been the the victim of “obsessive harassment” online and has to notify the local police of her movements due to fears of being assaulted.

Duffield likened Starmer’s lack of action to his far-left predecessor Jeremy Corbyn, comparing her current experience to when she was censored after she attempted to whistleblow about antisemitism in the party.

“I don’t feel there’s a huge amount of difference at the moment. And some of those characters are still around and still organising against me,” she said per The Telegraph.

Corbyn was embroiled in several antisemitism scandals throughout his premiership, with even Britain’s Chief Rabbi branding Corbyn as “unfit for office” for his enabling of prejudice against Jewish people to fester in the Labour Party.

The MP, who has represented Canterbury since 2017, admitted that she has been “tempted” to defect to the Conservative Party — despite ideological differences — as a result of the abuse she has been experiencing, which included having to cancel her attendance at Labour’s 2021 Party Conference after she received a backlash for stating “only women have a cervix”.

Duffield said at the time that she had concerns about the presence of “LGBT+ Labour” at the conference, who she claimed seemed “to hate my guts”, and was worried they may verbally attack her at the event.

The Canterbury MP suggested that the reason this toxic culture was allowed to persist in the Labour Party was because Labour consists of two parties under one banner, the “Corbynistas wing” and the “centrists”.

Duffield said that she does not believe Starmer will be able to unite Labour and suggested he will also be unable to rid the party of the far-left extremists as they are “digging down” in the party and it would upset the unions – which the Labour party relies on for vital funding.

Labour is currently experiencing financial difficulties, having been forced to make around 80 staff redundant following a loss of £3 million of funding in 2021 after hard-left unions and members withdrew their support from the party, as a result of Starmer being perceived as too centrist, despite siding with radicals such as the Black Lives Matter movement.