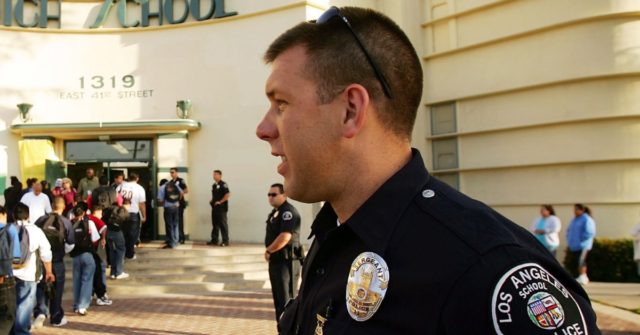 The Los Angeles Times reported that the teachers’ union made the announcement at an event with Black Lives Matter leaders, and called the move a step toward dismantling “white supremacy”:

Leaders of United Teachers Los Angeles said Monday they support a movement to eliminate the Los Angeles School Police Department, a force of about 400 that serves the L.A. Unified School District and accounts for about $70 million of the district’s $7.9 billion budget.

“We have to dismantle white supremacy. We must … defund the police and bring in the mental health services that our students need,” said Cecily Myart-Cruz, the incoming president of UTLA, which represents about 30,000 teachers, nurses, counselors and other staff in the school district.

The union leadership endorsement and public announcement during a labor news conference with Black Lives Matter Los Angeles bring an influential voice to what is certain to be an intense debate over school safety.

Leaders of the police union voiced dismay. School police officers are often called upon to break up fights, keep the peace in gang-ridden school districts, and deter school shootings, which have been a worry in recent years.

The Times reported in February 2018 that school police are part of the district’s strategy at preventing mass shooting events. The Times added that many parents in the district supported the presence of armed police officers on school grounds, adding: “School shootings are rare, and schools generally are safer than the neighborhoods they’re in.”

UTLA’s Facebook page indicates that it has been enthusiastically supportive of Black Lives Matter protests.

Andrew Pollack, whose daughter Meadow died in the Parkland high school shooting in Florida in 2018, warned Monday that the Black Lives Matter movement was encouraging school districts to cut ties with police forces.

“If you live in a Democrat-run city, get your kids out now. Because I can tell from personal experience, if your kid gets murdered in school and you have a problem with it, they’ll just call you racist and double down,” he wrote.