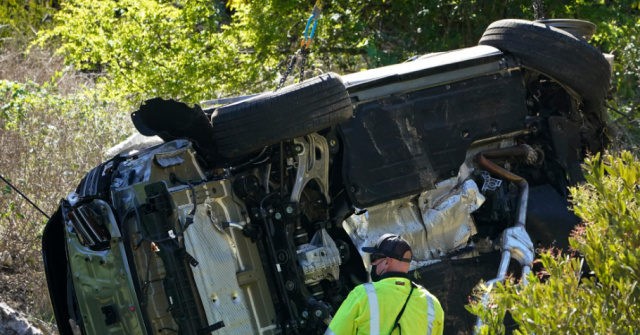 Law enforcement checked Woods and the vehicle for any sign of drugs and alcohol or other signs that he was under the influence of a substance. Officers did not see any signs.

“Deputies at the time, they did not see any evidence of impairment,” says Los Angeles County Sheriff Alex Villanueva during a press conference following Tiger Woods’s rollover crash https://t.co/gwiAkE30QQ pic.twitter.com/rgQEm096Ht

Woods was conscious as firefighters extracted him from the windshield using a Halligan tool and an axe. It was originally reported that Woods had to be extricated from the vehicle with the “jaws of life” tools.

In a statement to Golf Digest, Woods’ agent Mark Steinberg said the professional golfer “suffered multiple leg injuries and is “currently in surgery.”

“[W]e thank you for your privacy and support,” added Steinberg.

Woods, 45, was in California for a two-day content shoot with Golf Digest/GOLFTV after serving as host for the PGA Tour’s Genesis Invitational over the weekend. Pictures surfaced on social media of Woods smiling with Dwayne Wade and David Spade at Rolling Hills Country Club on Monday, but with his movement still restricted, he did not hit balls or play any holes.

Former President Donald Trump, a longtime friend of Woods, issued a statement shortly after law enforcement confirmed the crash: “Get well soon, Tiger. You are a true champion!”

Justin Thomas, the Number 3 golf player in the world, also weighed in on the incident, saying the news made him “sick to my stomach.”

“It hurts to see one of my closest friends get in an accident. Man, I just hope he’s all right,” Thomas added.

This is the third time Woods has been involved in a car investigation. The most notorious was the early morning after Thanksgiving in 2009, when his SUV ran over a fire hydrant and hit a tree. That was the start of shocking revelations that he had been cheating on his wife with multiple women. Woods lost major corporate sponsorships, went to a rehabilitation clinic in Mississippi and did not return to golf for five months.

In May 2017, Florida police found him asleep behind the wheel of a car parked awkwardly on the side of the road. He was arrested on a DUI charge and said later he had an unexpected reaction to prescription medicine for his back pain. Woods later pleaded guilty to reckless driving and checked into a clinic to get help with prescription medication and a sleep disorder.