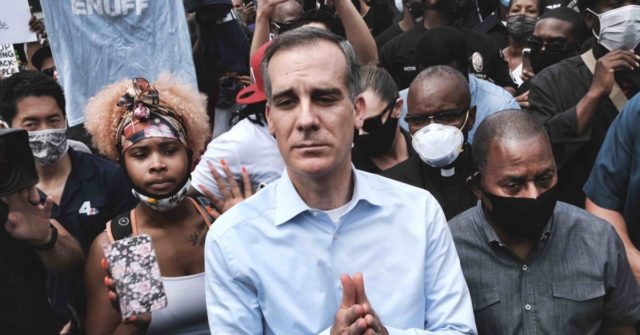 The Los Angeles police union is calling Mayor Eric Garcetti “unstable” after he called police “killers” on Thursday, as members accused the City Council of “bow[ing] to Black Lives Matter.”

“We are worried and concerned about Eric Garcetti. He is clearly unstable …  if the city had the equivalent to the 25th Amendment to remove shaky or unstable leaders from office, we would plead for it to be invoked,” McBride said.

On Wednesday, Garcetti said that he was cutting $150 million (over 10%) from the LAPD and redistributing it to projects that would serve “communities of color” as part of an effort to “reinvest” $250 million overall.

In a meeting with L.A. City Councilwoman Monica Rodriuez, which was posted on Twitter on Friday by Jasmine Viel of CBS Los Angeles, officers blasted the city’s plan, noting that they had kept L.A. from burning down in recent riots.

“You bow down to Black Lives Matter. These police officers that are out here protecting this city … if it wasn’t for them, this city would be burnt down right now,” a union representative said, vowing to “go to our grave fighting.”

Video posted of LAPD officers outraged over proposed cuts following protests addressing LA City Councilwoman Monica Rodriguez. “Now you’re cutting from their families and they put everything on the line? We are going to fight… At the ballot box.” @CBSLA @CBSNews pic.twitter.com/9YXcMCd3Hd

She noted the irony that the city had already put many civilian employees on furlough because of a lack of funding, but was now proposing to redistribute $250 million.

“And now you’re cutting from their families, when they’ve put everything on the line? We’re gonna fight,” she said.

Another voice chimed in: “At the ballot box.”

The “killers” remark happened during a meeting with community leaders at the First African Methodist Episcopal Church in South Los Angeles on Thursday. Garcetti was describing what he saw as a positive nationwide response to his proposal to cut the police budget, amidst calls by activists in the streets to “defund the police.” He said: “It starts someplace, and we say we are going to be who we want to be, or we’re going to continue being the killers that we are.”

Later, Garcetti claimed he was using the term “killers” to refer to police elsewhere, not in Los Angeles itself.