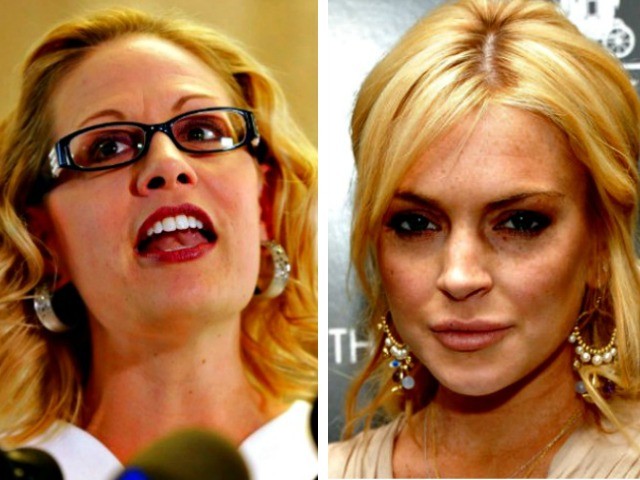 Yet another video has surfaced of Democrat Senate candidate Kyrsten Sinema mocking Arizonans, this time calling Arizona “famous in a Lindsay Lohan kind of way.”

“All around the world people know what’s happening in Arizona, and not in a good way,” Sinema said in a speech identified as dating back to 2011. “We’re not famous, like, in a good way.”

“We kind of like, in a Lindsay Lohan kind of famous way, not good,” she completed the smear. Lohan spent time in rehab for substance abuse and jail for drunk driving, possession of cocaine, and theft from 2007 to 2011.

Sinema, who is running against Republican Rep. Martha McSally to replace outgoing Sen. Jeff Flake, has repeatedly belittleded the people of Arizona.

Sinema called Arizona the “meth lab of democracy” in her 2010 Netroots Nation speech. She credited the statement to the Daily Show, then added, “But I’m happy to steal it and use it all the time.”

During a 2011 speech in Texas, Sinema proclaimed Arizonans “crazy” and her intention to teach her audience how to “stop your state from becoming Arizona.” She faulted Republicans for making the state crazy. A 2006 Phoenix Business Journal report cited a 944 magazine interview with Sinema in which she called conservative Republicans “neaderthals” and disparaged stay-at-home moms as “leeching off their husbands.”

Sinema’s full comments as reported in the Journal were, “These women who act like staying at home, leeching off their husbands or boyfriends, and just cashing the checks is some sort of feminism because they’re choosing to live that life. That’s bullshit. I mean, what the fuck are we really talking about here?” She later tried to excuse the comments as tongue in cheek and sarcastic. The article identified her at the time as a more liberal Democrat in the state legislature.

The U.S. Congresswoman from Arizona has also repeatedly slammed Arizonans on Twitter. “Just one day, I’d like Arizona to be in the news for something good.  Just one day people,” she wrote in June 2010.

Just one day, I’d like Arizona to be in the news for something good. Just one day people.

“Dear Rest Of The World, I just want you to know, Arizona wasn’t always this crazy. It used to be pretty great, actually.  Sincerely, Kyrsten,” she posted in February 2011.