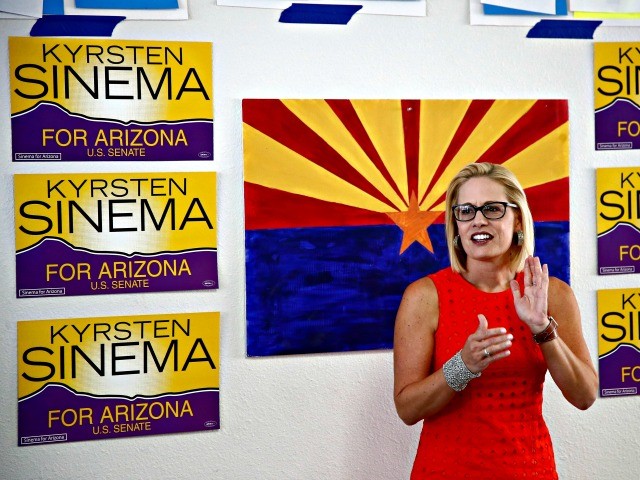 Democrat Senate contender Kyrsten Sinema of Arizona mocked Arizonans as “crazy,” as shown in video of a 2011 Texas event.

Sinema is seen on video posted to YouTube telling a cackling group that she learned of the five C’s of Arizona as a kid, the things from which Arizona’s economy has historically profited. “But I would add a sixth C,” she told the crowd. “It’s called crazy.” The five she listed before adding a the sixth were cattle, copper, citrus, cotton, and climate.

She claimed in the 2011 speech that for several years “people would watch what’s happening in Arizona and be like, ‘Damn, those people are crazy. Is it something about the water?’” She said her response was, “No, the water’s fine. We swell from Colorado. There’s nothing wrong with the water. They just- they’re just called Republicans.”

Sinema told the group she wanted to teach them what they could to to “stop your state from becoming Arizona.”

Sinema’s comments are not unprecedented for the politician. The Phoenix Business Journal reported in 2006 on then-recent comments she made to 944 magazine calling conservative Republicans “Neaderthals” and blasting stay-at-home moms as “leeching off their husbands.”

The full comment about moms read, according to the Phoenix New Times, “These women who act like staying at home, leeching off their husbands or boyfriends, and just cashing the checks is some sort of feminism because they’re choosing to live that life. That’s bullshit. I mean, what the fuck are we really talking about here?”

Sinema later attempted to explain away the comments by claiming they were somewhat tongue in cheek and sarcastic. The article identified Sinema as “one of the more liberal Democrats in the state Legislature.”

Sinema is locked in a race with Republican Martha McSally to replace Jeff Flake in the U.S. Senate.