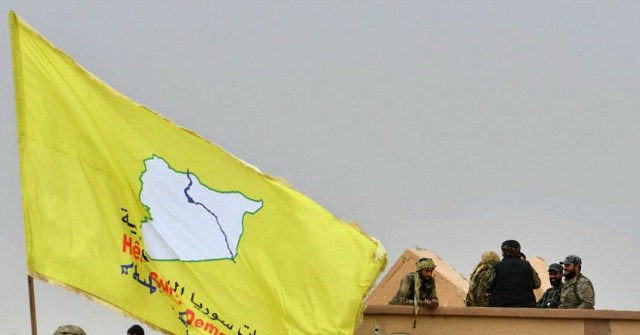 The Kurdish news service Rudaw reported on Tuesday that elements of the Islamic State (ISIS) are taking advantage of Turkey’s invasion of Syria to increase the tempo of their own attacks on positions held by the Kurdish-led Syrian Democratic Forces (SDF).

Rudaw wrote that ISIS is hitting the SDF from the south while the Turkish army and its Syrian proxies hammer them from the north:

With the SDF distracted by the Turkish invasion, emboldened ISIS sleeper cells have upped their attacks on the force, most recently near the al-Hol camp where tens of thousands of ISIS families and supporters are being held. As detainees staged riots inside the camp, militants targeted a vehicle belonging to the SDF in the vicinity of the camp on Sunday, killing and injuring a number of fighters.

The ISIS propaganda channel Nashirnews via messaging app Telegram said on Monday that the “soldiers of the caliphate” targeted a vehicle of the “apostate,” referring to SDF forces, with an improvised explosive device (IED) near the grain silo in al-Hol town killing and injuring those inside the vehicle.

The SDF called on the international community to shoulder its responsibility by repatriating over 2,000 foreign fighters currently detained in northern Syria, but has received no answer. Dozens of children born to ISIS families have been taken back, but European countries appear to be unprepared to take responsibility for their adults.

According to the report, ISIS is also “conducting a sophisticated campaign of intimidation and assassination of individuals like heads of villages who are the eyes and ears of the SDF in Deir ez-Zor and Raqqa provinces.” The Kurdish media reported an Islamic State media statement claiming responsibility for one such political assassination in Deir ez-Zor.

Reports estimate that about 850 Islamic State captives – including jihadists, jihadi wives, and children conceived in the caliphate – were in Kurdish custody before “Operation Peace Spring,” Turkey’s invasion of Syria, began last week, and have since fled. Thousands of others, many captured in the “caliphate” capital of Raqqa, remain in Kurdish custody. As the Kurds do not have an independent state, they do not have a legal system to try these individuals in; many are European nationals who their countries’ justice systems have yet to claim.

The Islamic State has not been dormant since the fall of its “caliphate” in Syria and Iraq. The terror gang launched over 250 attacks during the past year and still commands tens of thousands of fighters, many of them organized into “sleeper cells” lurking in liberated territory. ISIS and its affiliates have also conducted terrorist attacks in other countries around the world.

The SDF declared on Wednesday that they intend to defeat the Turkish army, significantly diminished by Erdogan’s multiple purges against senior members of the military. Military leaders attempted a coup against Erdogan in 2016 and failed, prompting Erdogan to dismiss and imprison thousands of individuals from military and civilian government jobs.

Erdogan is fighting alongside the Free Syrian Army (FSA), a rebel coalition that began as an anti-Assad militia but has since incorporated Arab Sunni jihadists into their fold.

“Let the mercenaries of the Turks, of Erdogan, and everyone know that no one can defeat the YPG,” the Syrian Kurdish People’s Protection Units (YPG/YPJ), which form the backbone of the SDF, told Rudaw in a statement. “Let them know we are the people who are on the just side. We are protecting our country.”