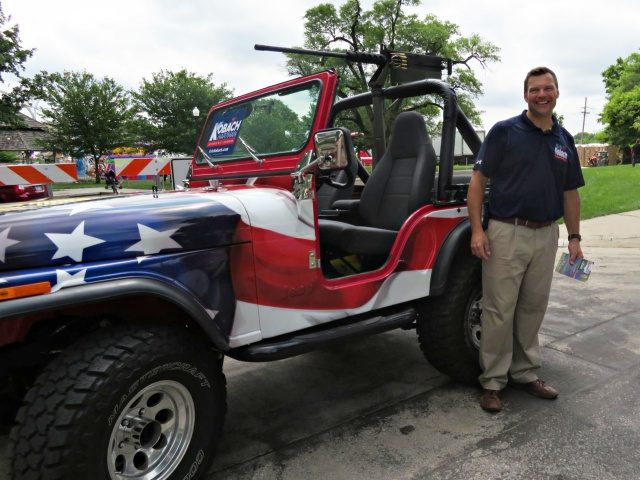 Kansas Secretary of State and gubernatorial candidate Kris Kobach has been prevented from riding in a local Kansas parade alongside a replica machine gun.

Organizers with the Iola Farm City Days parade have reportedly told Kobach he cannot ride in the parade with a replica military gun mounted on a patriotic Jeep. Kobach previously rode in a nearby local Kansas parade atop the Jeep, garnering outrage from leftists across the state.

Virginia Crossland-Macha told Breitbart News she resigned as president from the Farm City Days committee after the organization apparently voted to ban Kobach’s replica gun from the parade.

“Living in one of Kansas areas where there is a high population of gun enthusiasts who are avid 2nd amendment supporters, one has to think that maybe this is more than just about a replica [gun],” Crossland-Macha told Breitbart News in a statement.

“It just saddens me,” Crossland-Macha said.

The Farm City Days parade organizers did not have any provisions in initial entry forms to be in the parade that stated replica guns were not allowed.

Kobach told Breitbart News that the ban on his replica gun being in the parade is a First Amendment violation.

”The First Amendment prevents a city-funded parade committee from discriminating against people who wish to express support for the Second Amendment,” Kobach said. “A few anti-gun liberals do not have the right to stop the expression of our pro-Second Amendment views.”

“These anti-gun liberals are completely out of step with the views of the people of Iola,” Kobach told Breitbart News.

Kobach has previously told Breitbart News that attempts by left-wing organizations to ban the patriotic Jeep and replica gun are designed to rid the country’s heritage of gun culture.