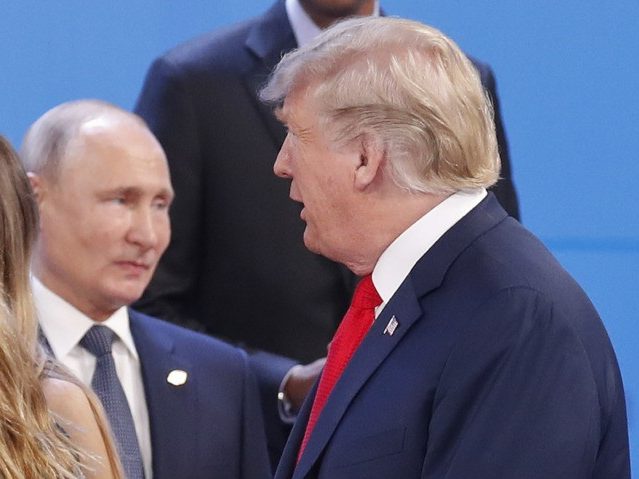 President Donald Trump on Thursday formally canceled his planned G-20 summit meeting with Russian President Vladimir Putin in response to Russia’s attack on Ukrainian ships near Crimea last weekend, but the Kremlin insisted on Friday that Putin and Trump will have a “brief impromptu meeting” similar to Putin’s encounters with other summit attendees.

#BREAKING: #G20Summit: Kremlin says Putin and Trump will have brief impromptu meeting, same as other leaders

“There is no scheduled pull-aside,” a White House official countered.

Trump said on Thursday that he was canceling his meeting with Putin because “the ships and sailors have not been returned to Ukraine from Russia.” This was a reference to the three ships and 24 Ukrainian sailors seized by Russia on Sunday.

“I look forward to a meaningful summit again as soon as this situation is resolved!” Trump added, allowing for the possibility of meeting with Putin after the Ukrainians are released, perhaps after the G-20 summit concludes.

President Trump’s most notable “impromptu” encounter on the first day of the summit in Buenos Aires was with Saudi Crown Prince Mohammed bin Salman. The two reportedly “exchanged pleasantries” during their first encounter in person since Saudi agents murdered Washington Post contributor Jamal Khashoggi at the Saudi consulate in Istanbul last month.

President Trump denounced the murder as a “horrible crime” but refrained from taking action against the crown prince, citing the importance of maintaining the U.S.-Saudi relationship and the dearth of hard evidence linking bin Salman to the killing. According to President Trump, he and the crown prince “had no discussion” of substantive issues during their encounter, but added they might speak again before the summit is over.

Crown Prince Mohammed bin Salman went on to have a much more uncomfortable encounter with French President Emmanuel Macron. Journalists spent Friday poring over a viral video clip of bin Salman and an agitated, “worried” Macron trying to figure out exactly what they were talking about. Neither of them appeared to enjoy the conversation. Macron’s people said the French president strove to convey his severe disapproval of the Khashoggi killing.

Putin, on the other hand, was all smiles when he greeted the Saudi crown prince with a hearty laugh and a strange high-five handshake. Trump, one of the last attendees to arrive for a group photo, walked past Putin and bin Salman without shaking hands or talking to them.

Trump’s other important sideline meetings are scheduled to include Turkish President Recep Tayyip Erdogan, who wants the Saudis punished more harshly for the Khashoggi murder, and President Moon Jae-in and Prime Minister Shinzo Abe of South Korea and Japan, respectively, who are vital U.S. allies in the push to denuclearize North Korea.