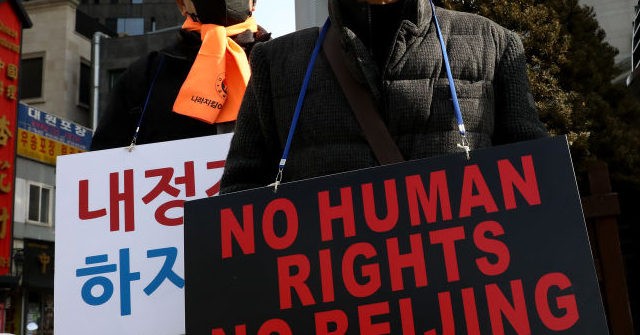 A South Korean civic group called the “Righteous People” tore up a Chinese Communist flag at a rally near the Chinese Embassy in Seoul on Friday.

The event was a protest against what some South Koreans see as unfair referee calls at the Beijing Winter Olympics and the cultural appropriation of traditional Korean dress and food at Olympic ceremonies.

Lee Eun-taek, head of the civic group, said he got very angry to see China undermining the spirit of the Olympics after culturally appropriating “hanbok” (traditional Korean clothes) and kimchi from Korea.

A woman, who introduced herself as a 20-something who once dreamed of becoming an athlete, said unfair refereeing can break the dreams of young people and condemned the South Korean government for not saying a single word of protest to the Chinese government.

In the men’s 1,000m semifinals on Monday, South Korea’s Hwang Dae-heon and Lee June-seo each got disqualified from their respective heats for an illegal pass and lane change, respectively. Those decisions each allowed Chinese skaters to advance to the final, and the host country ended up collecting gold and silver medals.

A woman performing at the opening ceremony for the Beijing Winter Games last Friday wore a white and purple hanbok dress, sparking anger about cultural appropriation on South Korean social media and criticism from some South Korean politicians.

South Korea’s ire was not soothed by pushback from Chinese nationalists on social media or the official response from the Chinese embassy that essentially claimed Chinese people have as much right to wear a traditional Korean dress as Koreans do because many ethnic Koreans live in China, so “claims of cultural appropriation are totally untenable.”

The kimchi controversy dates back to November 2020, when China secured certification from the International Organization for Standardization (ISO) for pao cai, a pickled vegetable dish from Sichuan province that is very similar to South Korea’s signature dish, kimchi.

South Korean anger was stoked by Chinese state media declaring that because of the ISO certification, China was now the leader of the “kimchi industry.” A metaphorical food fight ensued as Chinese “netizens” boasted that most of South Korea’s kimchi is manufactured in China these days.

“I read a media story that China now says Kimchi is theirs, and that they are making international standards for it. It’s absurd. I’m worried that they might steal Hanbok and other cultural contents, not just Kimchi,” one resident of Seoul complained – prophetically, as it turned out.

The Olympic judging controversy brought a formal protest from South Korea’s Sport and Olympic Committee (KSOC). Team South Korea held a press conference in Beijing to insist its disqualified athletes Hwang Dae-heon and Lee June-seo “played fairly” and were the true “winners” of the event.

Allegations of Chinese cheating spread like wildfire through South Korean broadcast and social media – and among Olympic athletes from South Korea and other countries, who said biased judges were giving Chinese competitors a pass for technical violations that were invoked to disqualify Olympians from other countries.

“Looking at the way China won the gold medal, I felt bad that my younger teammates had to watch something like that. I thought to myself, ‘Is this really what winning a gold medal is all about?’ Things all just felt very hollow,” sighed South Korean speed skater Kwak Yoon-gy.

The Chinese Embassy in Seoul expressed “grave concern” on Wednesday about the growing allegations of cheating against China, firmly insisting that no such nefarious behavior had taken place at the Beijing Olympics.

“Some South Korean media and politicians have criticized the Chinese government and Beijing Olympics as a whole, even instigating anti-Chinese sentiment, worsening the public sentiment of the two countries and drawing a backlash from Chinese online users,” the embassy pontificated.