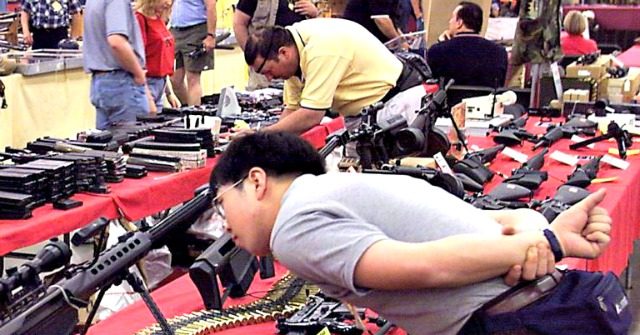 On Thursday, Senate Majority Leader Mitch McConnell declared that the Senate would take up gun control in the wake of the El Paso and Dayton mass shootings, with expanded background checks “front and center.”  He added, “What we can’t do is fail to pass something.”

In the days since, the silence from Senate Republicans has been deafening. Only Senator John Barrasso (WY) has pushed back vocally in defense of firearms owners. Unfortunately, many other Republicans seem afraid to suggest that Senator McConnell is wrong.

At work here is the politician’s constant desire to pass something whenever there’s a crisis. Whether that “something” actually addresses the problem is unimportant. At least the good senator can say that he or she did something.

We all agree that if a new law could reduce these horrendous mass murders, Congress ought to pass it.  But in this case, the proposed solution would have done nothing to stop the shootings in El Paso and Dayton.  Both shooter purchased their firearms legally from dealers who were Federal Firearms Licensees (FFL) and passed the background checks.

Presumably, Majority Leader McConnell is talking about having the Senate take up H.R. 8, which was passed by the Democrat-controlled House in February.

H.R. 8 is sold as a means of closing the so-called “gun show loophole” – a reference to the fact that some sales of firearms by non-FFL sellers at gun shows are done without a background check. The “gun show loophole” is actually a misnomer; there’s no exception for gun shows in federal law. There is, however, an exception allowing two private, non-FFL residents of the same state to exchange a firearm without first running a background check. It doesn’t matter if it occurs at a gun show, a private home, or anywhere else. Moreover, many gun show sales do require background checks – for example, because the buyer and seller reside in different states, or because the seller at the gun show is an FFL, or because the state hosting the gun show requires it. There’s an important, constitutional reason for the two-state requirement in federal law – otherwise the sale contains no nexus to “interstate commerce,” and Congress cannot regulate it.

H.R. 8 is better described as a “universal background check” bill – one that goes far beyond gun shows. It would force almost all informal, private transfers of firearms to first pass a federal background check initiated by an FFL.

Unfortunately, the bill restricts all kinds of gun transfers between law abiding friends and family members who know each other perfectly well. As I wrote when the House passed it, H.R. 8 imposes drastic restrictions upon firearms gifts between friends and family, as well as on the borrowing of firearms. The bill supposedly contains an exception to allow gifts between family members. However, upon closer inspection, it becomes clear that the exception is unreasonably narrow. It only applies to transfers involving spouses, children, grandchildren, siblings, and nieces/nephews.

It doesn’t include in-laws, cousins, or friends. Many guns are given or sold perfectly safely in this manner. Personally, I’ve acquired several guns this way. For example, when an elderly friend and hunting companion of my family passed away, his widow wanted me to have two of his favorite shotguns. Now, whenever I hunt with those guns in the field, I remember him fondly. That transfer didn’t pose any risk to the public.

But under the Democrats’ bill, law abiding citizens would have to first take their firearm to a gun dealer to run the background check. For the widow of my elderly friend, that would have been too much of a burden.

And it might also have been too expensive. The bill contains no limit on the fee charged by the FFL who does the background check.  In many rural areas, there’s only one gun dealer around. As correctly pointed out by Amy Swearer of the Heritage Foundation, that gun dealer has an incentive to make the price of such private transfers expensive, in order to discourage them and drive more business to his own shop.

Another problem with the bill is that it restricts handgun possession by adults aged 18-20, without saying so. As explained by law professor David Kopel, since current law does not allow FFLs to perform background checks on these young adults, they would no longer be able to receive such firearms as gifts from anyone but close family members. The young woman who wants to borrow a gun from a friend to protect herself would be out of luck.

So universal background checks would make it much more difficult and expensive for friends and family to give firearms to one another and exercise their Second Amendment rights. But at least we’d make it harder for criminals to get guns, right?  Wrong.

The dirty little secret about the whole background check system is that it is routinely circumvented by criminals. Instead of buying the gun himself, the criminal simply has a person with a clean record buy the gun for him. These “straw purchaser” arrangements are illegal, but they’re almost impossible to detect and extremely difficult to prosecute. Indeed, it appears that the 2015 San Bernardino mass shooter acquired his firearms that way.

Could the background check system be improved? Yes. For example, federal law already bars the transfer of fa irearm to a person who has been adjudicated by a court to be mentally ill. And many such records are still not in the system. But that needs to be done by the states, which are already eligible to receive federal grants to do so. However, that improvement is a far cry from what the Senate is considering. Indeed, it doesn’t involve the Senate at all.

In short, the universal background check legislation to be considered by the Senate would not have stopped the cor the Dayton shooting. And it would do nothing to stop mass shootings in the future. Meanwhile, law-abiding Americans would experience onerous restrictions on their right to obtain firearms.

But at least the Senators will feel good about themselves because they “did something.”

Kris W. Kobach served as the Secretary of State of Kansas during 2011-2019.  He was a professor of constitutional law at UMKC Law School for 15 years from 1996 to 2011.  He is currently General Counsel for We Build the Wall.  An expert in immigration law and policy, he coauthored the Arizona SB-1070 immigration law and represented in federal court the 10 ICE agents who sued to stop President Obama’s 2012 DACA amnesty.  He is currently a candidate for Kansas’s U.S. Senate that will be open in 2020.  His website is kriskobach.com.