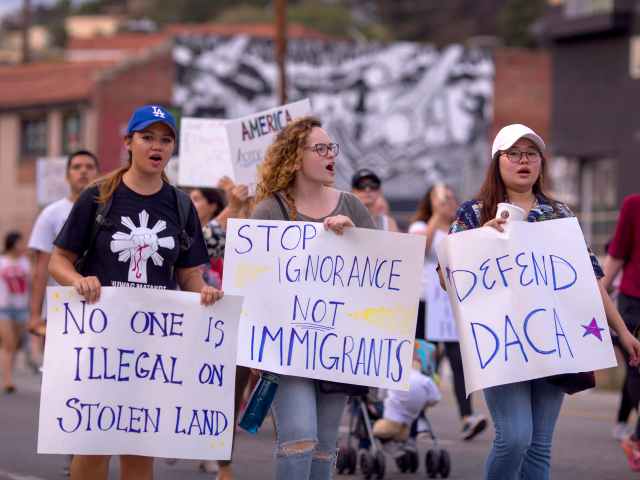 It’s nothing new when the politically correct left declares certain words and phrases verboten. After four decades of political correctness in America, we’ve gotten used to it.

But every once in a while, the language police does something truly bizarre and idiotic. It’s happened recently on the campus of Emporia State University in Kansas. Republican Associated Student Government Vice President Michaela Todd had posted the following on her Facebook page in the run-up to Election Day (in support of my candidacy for governor): “Kobach will … [p]ut Kansans first, not illegal aliens. The millions of dollars spent on public welfare for illegal aliens in Kansas hurts Kansas taxpayers every single day.”

That was just too much for the campus left to take. They decided they were going to shut Ms. Todd up. The reason? Her use of the term “illegal alien.” To them, the term is “dehumanizing.” They launched an effort to impeach her, which failed.

But the language bullies were not satisfied with the failed impeachment vote. They demanded that the university administration do something to punish Ms. Todd for her language. They complained that they felt “threatened” by Ms. Todd’s use of the phrase “illegal alien.”

In contrast, the politically correct phrase of the left, “undocumented immigrant,” is found nowhere in federal law.

The term “immigrant” has a specific meaning in the law. It refers to a lawful permanent resident or someone who has a “green card.” So, by definition, an immigrant is documented.

But don’t tell that to the snowflakes at ESU. They were all set to impeach Ms. Todd until they were told by an attorney that she has a First Amendment right to use the phrase. Frustrated by that pesky freedom of speech, they settled for passing a resolution urging the removal of the terms “illegal alien” and “illegal” from the university’s marketing and media.

If the campus left prefers to use the inaccurate term “undocumented immigrant” because it makes them feel good, that’s fine. But their attempt to control the language of others is deeply troubling.

If one person’s claim of feeling “threatened” by words found in federal law entitles him to silence another, then there’s not much hope for the free exchange of ideas. Such censorship also displays extraordinary ignorance – both of the terms used by federal law and of the meaning of the First Amendment.

Kris W. Kobach is the elected Secretary of State of Kansas.  An expert in immigration law and policy, he coauthored the Arizona SB-1070 immigration law and represented in federal court the 10 ICE agents who sued to stop Obama’s 2012 DACA executive amnesty. During 2001-03, he served as U.S. Attorney General John Ashcroft’s chief adviser on immigration and border security at the U.S. Department of Justice.  His website is kriskobach.com.