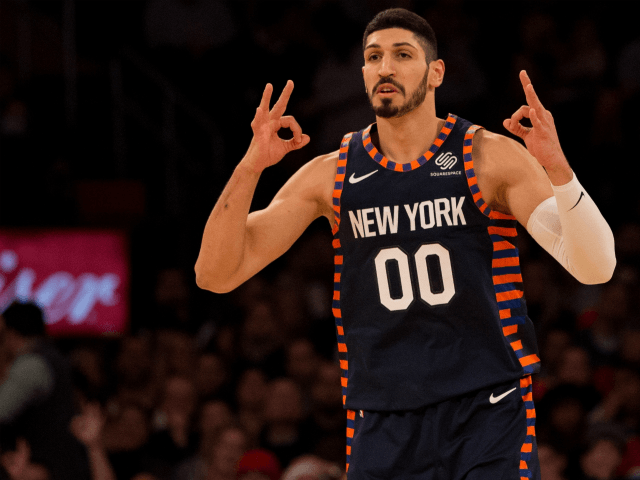 New York center Enes Kanter will be a no-show in London for the Knicks’ upcoming international game. He is withdrawing because he believes he is an assassination target based on his opposition to Turkish President Recep Tayyip Erdogan.

Erdogan routinely uses a law against “insulting the president” to imprison and/or harass anyone critical of his government. In 2017 his prosecutors demanded a four-year sentence for Kanter because of his perceived hostility to Ankara.

In May of last year Kanter — who then played for the Oklahoma City Thunder — was detained at a Romanian airport after being told on arrival his Turkish passport was cancelled — a move that Kanter blamed on his political views, AFP reports.

He was allowed to depart hours later, but said at a subsequent press conference in the United States that he feared he would be deported from Romania to Turkey.

Kanter’s decision not to travel to the UK capital was made public on Friday night after the Knicks’ 119-112 win over the Lakers.

“Sadly, I’m not going because of that freaking lunatic, the Turkish president,” Kanter said, according to ESPN. “There’s a chance that I can get killed out there.”

“It’s pretty sad that just all this stuff affects my career in basketball, because I want to be out there helping my team win,” the 26-year-old player added. “But just because of that one lunatic guy, one maniac or dictator, I can’t even go out there and just do my job. So it’s pretty sad.”

“They got a lot of spies there,” Kanter replied when asked if he really believed he could be killed traveling to London. “I can get killed pretty easy.”

The Knicks will play the Washington Wizards at the O2 Arena on 17 January.

An arrest warrant was issued for Kanter’s father, Mehmet, in June 2018 after the university professor was accused of contacting Erdogan opponent Fethullah Gulen, who has been living in exile in the United States since 1999.