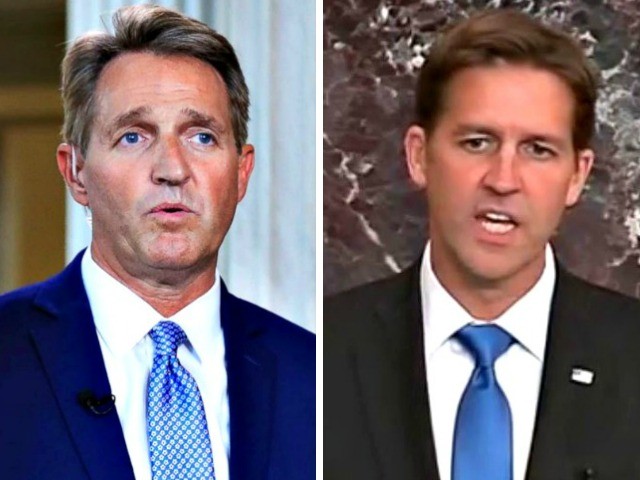 Jeff Flake and Ben Sasse are NeverTrump, but they have always called for limited government and faithfully interpreting the Constitution.

With the accusations against Brett Kavanaugh discredited, confirming him to the Supreme Court would be the greatest victory for limited constitutional government those senators could ever deliver, advancing their vision for America’s future. It could create the first conservative Court in decades.

Flake and Sasse come from different backgrounds and focus on different priorities. But for each of them, the issues they ran for office to advance would take a quantum leap forward with Kavanaugh on the Supreme Court.

For Flake, ever since his days as the executive director of the Goldwater Institute in Phoenix, his focus has been on a federal government of limited reach, on deregulation, and on free-market economics.

For Sasse, it is a more philosophical matter of a government that strictly adheres to the Constitution, and nurturing a culture of private morality and public virtue.

The reality is this: There has not been a broad-based conservative majority on the U.S. Supreme Court for decades. It is likely that Kavanaugh will be the crucial fifth vote to give life to Flake and Sasse’s vision. It is a once-in-a-generation opportunity for them.

Flake understands that limited government endures only when people govern themselves. His statements throughout almost 20 years in public office contemplate the reality that government is legitimized coercion, and so the scope of government needs to be limited in order for people to be free to pursue opportunity and raise their families as they see fit.

Sasse understands the Madisonian Dilemma from The Federalist No. 51, that if men were angels, no government would be necessary, but because those who serve in government are not angels either, the power of government must be constrained. One of those constraints Madison identifies is the separation of powers, and another is federalism.

Both senators extol Thomas Jefferson’s belief that America’s republican system enshrined in the Constitution requires “virtuous citizens” to succeed, where values are instilled in the next generation and people act as individuals and families in an honorable and productive fashion, with faith in something greater than self and living a life in pursuit of noble aspirations.

Kennedy was often the deciding vote on cases that abandoned free market policies or the Constitution’s structural safeguards of liberty. For both Flake and Sasse, Kavanaugh’s replacing Kennedy could become a dream come true.

For example, in 2005 Kennedy was the fifth vote in Kelo v. New London, where the Supreme Court held that government can seize a private home to give to a developer who demolishes the house to build a strip mall. Conservatives dissented, saying the Constitution’s Takings Clause only permits the government to take property for public purposes (like building roads), and only if the owner receives fair market value.

And in 2007, Kennedy was the fifth vote in Massachusetts v. EPA, where the Court held that a state has standing to sue the federal government to force the Environmental Protection Agency to regulate CO2 as a pollutant. The conservative justices argued that even if global warming is happening and is caused by human activity, regulating every U.S. source of CO2 leaves 80 percent of greenhouse emissions worldwide untouched, and therefore that Article III of the Constitution does not give federal courts jurisdiction to decide these matters.

On these and many other issues, a Justice Kavanaugh would restore the rule of law and give full force to constitutional rights. He is an originalist, who believes in interpreting the Constitution according to the original public meaning of its provisions, and a textualist who believes that federal laws must be interpreted according to the clear meaning of their text, regardless of the judge’s policy preferences.

At the same time, Kavanaugh’s confirmation would not imperil priorities for moderate senators, so they too should feel comfortable voting for him.

Kavanaugh’s confirmation does not endanger Obamacare. He replaces Justice Anthony Kennedy, who voted with the three solidly conservative justices to strike down the Affordable Care Act entirely. The fifth vote to save Obamacare came from a moderate-conservative, Chief Justice John Roberts, who is not going anywhere.

Nor should Kavanaugh’s confirmation give Sens. Susan Collins (R-ME) or Lisa Murkowski (R-AK) pause. Only one sitting justice– Justice Clarence Thomas – has said he would overrule Roe v. Wade, and there is little reason to think that with Kavanaugh there would be a five-justice majority to do so.

But regarding the scope of federal power and the role of government, Kavanaugh’s confirmation would pave the way to keep the courts out of the debate between policymakers and businesses, to permit states and local communities to take the lead on issues where the Constitution does not put Washington, DC, in charge, and to give full effect to enumerated constitutional rights such as free speech, religious liberty, and the Second Amendment.

These undecided senators need to resist the temptation to think that if Kavanaugh were voted down, President Trump would nominate someone they like even better. To the contrary, a failed Supreme Court nomination is a kidney punch to any presidency.

Aside from the tax cuts, Republicans and conservatives think that the only worthwhile thing Senate Republicans manage to do is confirm President Trump’s excellent judges. It is possible that a failed nomination could supercharge the Right to show up to increase their Senate margin. It is more likely that voters would decide that Senate Republicans are pathetic, GOP turnout would collapse, and Democrats could take charge of the upper chamber.

Should that happen, then Kennedy’s seat would stay open until January 2021 after the next presidential inauguration. If an additional seat opens up, then the Court would continue with only seven justices, instead of eight or nine. Federal law requires only six justices for the Court to have a quorum to decide cases. Expect Democrats to cite that law as justification for blocking nominees as vacancies occur.

Even if Flake, Sasse, or other senators are undecided in part because they do not get along with the president, they must realize that blowing up the Supreme Court – and with it the first chance in decades to restore key constitutional rights and safeguards – is not the way to vent their frustration. And the Kavanaughs are a beautiful family who deserve better, in any event.

The Senate should confirm Brett Kavanaugh to the Supreme Court.