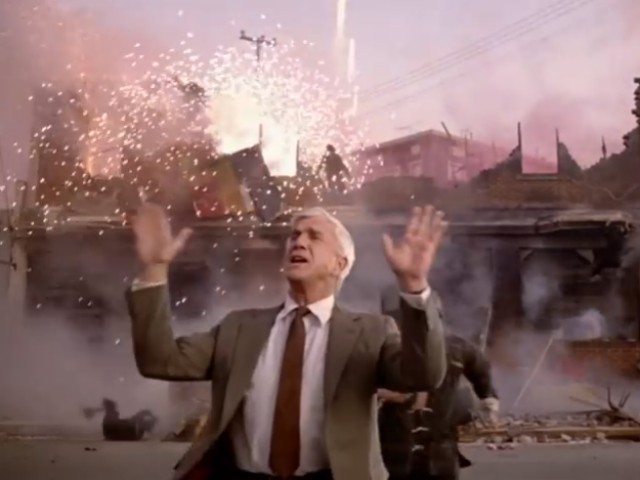 After a high-speed chase in Naked Gun that ends in the bad guy atop a missile crashing into a fireworks store, resulting in enormous explosions and fires, Leslie Nielsen’s character, Sergeant Frank Drebin, orders astonished onlookers: “Please Disperse! There is nothing to see here!”

If you have never seen Naked Gun, you can instead just watch CNN’s coverage of Florida’s election fiasco, as they shout to millions of Americans, “There is nothing to see here!”

Enter Blackwell, who points over their shoulder at the explosions and flames, as he says, “I’m pretty sure I see something over there.”

Camerota skeptically tasked Blackwell with proving how there is anything out of the ordinary in Broward County, and why voters should be concerned.

“There is a history of chronic malfeasance,” begins Blackwell. “There have been lapses in transparency and missed deadlines, and as a result, 93,000 votes have materialized.”

That history is long and colorful. A court found that in 2016, Snipes illegally destroyed ballots in a contested primary between former DNC Chair, Rep. Debbie Wasserman-Schultz, and her primary challenger. Snipes is an elected Democrat.

In her own most recent election as a partisan Democrat in 2016, Snipes released the election results 30 minutes before the polls closed, despite the fact that this is a felony in Florida. (A contractor claimed responsibility for the illegal release. No charges were ever filed.)

And in this very election, a state judge in Broward County has ruled that Snipes violated Florida public records laws for not following a demand by Gov. Rick Scott, who has now sued Snipes.

The numbers tell the story, as Blackwell explained. Florida law requires all ballots except for provisional ballots to be added to the totals by 7:30 p.m. on Election Day, half an hour after polls close. At that time, Snipes reported 634,000 total votes for Broward County.

President Trump tweeted, “Law Enforcement is looking into another big corruption scandal having to do with Election Fraud in #Broward and Palm Beach. Florida voted for Rick Scott!”

Law Enforcement is looking into another big corruption scandal having to do with Election Fraud in #Broward and Palm Beach. Florida voted for Rick Scott!

“Apparently #BrowardCounty elections left behind a box labeled ‘Provisional Ballots’ at a local elementary school that served as a polling place. Just let that sink in for a moment.”

Apparently #BrowardCounty elections left behind a box labeled “Provisional Ballots” at a local elementary school that served as a polling place.

Just let that sink in for a moment. https://t.co/o1Gn7mxOzG

Camerota then pressed Blackwell on whether he could prove that in the midst of all this lawbreaking and chaos that any voter fraud occurred.

But that is precisely Blackwell’s point. Part of the purpose of election laws is to create a tight ship where fraud would be difficult to carry out. With these huge gaps in records, illegally missed deadlines on tens of thousands of ballots, and acknowledged illegal ballots being mixed in with valid ones, none of us know what really happened, or if it tilted the race against the will of the voters of Florida.

Perhaps CNN will run another sequel to Naked Gun.