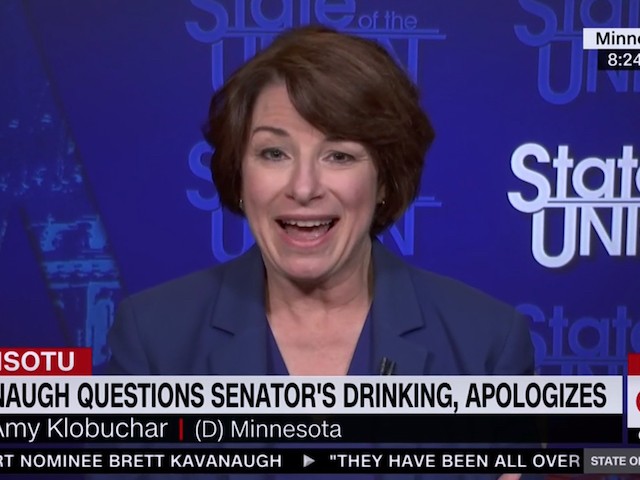 Sunday on CNN’s “State of the Union,” Sen. Amy Klobuchar (MN) said she was “stunned” by how Supreme Court associate justice nominee Brett Kavanaugh acted during her questions on his drinking habits in his teenage years at the Senate Judiciary Committee hearing last week.

Klobuchar said, “I was stunned about how he acted at that hearing. This is basically a job interview for the highest court of the land. All I was trying to get at are some of the issues you were discussing with Kellyanne Conway. And that is that everyone has said that they respected Dr. Ford for coming forward, that her testimony was compelling and credible. Both accounts can’t be true.”

She added, “And so one idea here is that he simply was drinking more than he was saying over this time period and that he didn’t remember what happened. So I was simply trying to get at that and really couching it in the fact that I had alcoholism in my own family. My dad who is 90 now struggled with it throughout his life and finally got treatment and is sober and got help from aa. So I was actually trying to get at the truth. And so that’s why I was stunned by how he answered it. But, of course, he later apologized.”