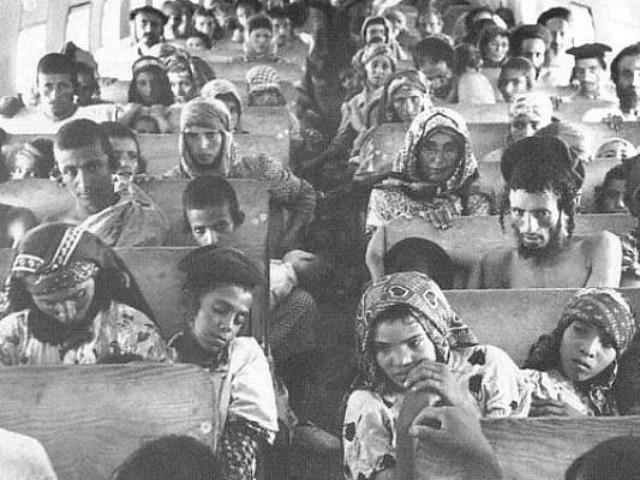 TEL AVIV — For far too long, Arab nations and Iran have not been called to account for their role in forcing hundreds of thousands of Jews to flee their homes in Arab countries, mostly without enough time to take their possessions or sell their property, following the founding of the Jewish state in 1948.

Out of the estimated 850,000 Jewish refugees who fled or were expelled from Arab countries and Iran, the majority were resettled in Israel at great expense to the Jewish state. The Arab nations and Iran did not offer any compensation or financial assistance to aid in the resettlement efforts, and those same nations unilaterally confiscated the Jews’ possessions.

Arab nations, meanwhile, have scandalously distorted the history of “Palestinian refugees” while entirely ignoring their own complicity in creating the so-called Palestinian “refugee” crisis by demanding that local Arabs vacate so invading armies could conquer the newly established State of Israel. This while the very real Jewish refugee crisis of the late 1940s and early 1950s, also created by the Arab states, remains largely forgotten.

Now Israel seems poised to finally hold the Arab world and Iran responsible for this historic injustice by demanding some $250 billion in restitution for the property and assets that the Jews left behind when they were forced to flee those countries.

After decades of letting the Arab nations and Iran off the hook, Israel’s expected move could not come soon enough and must be fully supported by the international community, including the Trump administration.

Citing quotes from the Israeli government as well as an Israeli TV report, the Times of Israel documented on Sunday:

Israel is preparing to demand compensation totaling a reported $250 billion from seven Arab countries and Iran for property and assets left behind by Jews who were forced to flee those countries following the establishment of the State of Israel.

For the past 18 months, utilizing the services of an international accountancy firm, the Israeli government has quietly been researching the value of property and assets that these Jews were forced to leave behind, the TV report said.

It is now moving toward finalizing claims as the Trump Administration prepares for the possible unveiling of its much-anticipated Israeli-Palestinian peace proposal. A 2010 Israeli law provides that any peace deal must provide for compensation for assets of Jewish communities and individual Jews forced out of Arab countries and Iran.

Gila Gamliel, Israel’s Minister for Social Equality, stated, “One cannot talk about the Middle East without taking into consideration the rights of the Jews who were forced to leave their thriving communities amid violence.”

“The time has come to correct the historic injustice of the pogroms (against Jews) in seven Arab countries and Iran, and to restore to hundreds of thousands of Jews who lost their property what is rightfully theirs,” Gamliel said. “All the crimes that were carried out against those Jewish communities must be recognized.”

The absorption of the Arab world’s Jews into the newly formed Jewish state is one of the greatest and most under-reported success stories of the Zionist movement. It is also one of the more shameful moments in the histories of Morocco, Iraq, Syria, Egypt, Yemen, Tunisia, Libya and Iran. Reparations are the very least those countries can do to begin to repent for the crimes that they committed against their former Jewish communities.