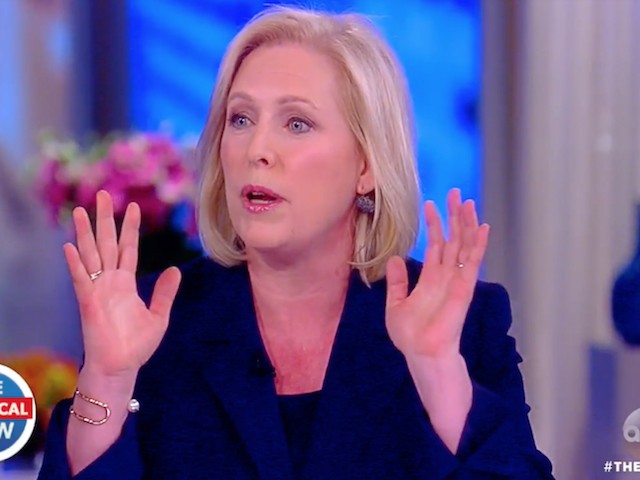 Gillibrand has refused to back the bill, which is co-sponsored by fellow Democrat Sen. Cory Booker and would impose monetary penalties on those working in an “official commercial capacity” who support any international government’s efforts to boycott Israel.

Gillibrand was an original co-sponsor of the pro-Israel legislation, but she stunningly withdrew her support after meeting with the heavily George Soros-funded American Civil Liberties Union (ACLU) on the matter. Also, her initial sponsorship for the anti-BDS bill was questioned at town halls by such radical anti-Israel groups as Jewish Voice for Peace and the U.S. Campaign for Palestinian Rights, both of which support the BDS movement.

Gillibrand’s about face on the pro-Israel legislation may be tied to her barely disguised presidential ambitions, an attempt by the industrious politician to more closely align herself with anti-Israel forces that dominate the progressive movement.

In that vein, Gillibrand has already evidenced alarming ideology and radical associations that move her closer to the anti-Israel camp.

She provided key support for President Obama’s nuclear deal with Iran, which the Israeli government strongly opposed over security concerns. She also opposed President Donald Trump’s decision to leave the Iran accord in hopes of negotiating a better deal.

Gillibrand has been repeatedly associated with virulent anti-Israel activist and radical Linda Sarsour.

In October, the New York politician appeared with Sarsour at a Washington D.C. rally to speak against the nomination of Supreme Court Justice Brett Kavanaugh. Sarsour introduced Gillibrand to attendees as a politician “who works for us on the inside.”

Gillibrand authored a glowing profile of Sarsour when the extremist made Time magazine’s 100 most influential people last year. Gillibrand hailed Sarsour and three other leaders of the anti-Trump Women’s March, which Gillibrand also headlined, as “extraordinary women.”

Gillibrand keynoted the October 2017 “Brooklyn Conference” at the Brooklyn Museum, which featured Sarsour as a speaker on the same day. Another speaker that day was Alicia Garza, co-founder of Black Lives Matter, which supports the BDS movement. The main sponsor of the conference, as advertised in literature for the event, was George Soros’s Open Society Foundations. The Open Society supports scores of pro-BDS groups.

Meanwhile, Gillibrand has coddled anti-Israel activists at town halls. In one example, she sided with an anti-Israel activist who claimed the Israeli government does not respect Palestinian rights. She also criticized Prime Minister Benjamin Netanyahu, who offered the Palestinians a state on numerous occasions, as “not hav[ing] a plan for peace.”

“I am concerned that Prime Minister Netanyahu does not have a plan for peace, and doesn’t have a vision for peace,” Gillibrand said at a July 2017 town hall meeting in the Bronx.

Gillibrand was responding to a comment at the event from a self-identified activist with the anti-Israel Jewish Voice for Peace who had charged that he “was brought up to respect the rights of all people, and under current Israeli policy that is not happening with Palestinians.”

“I share your concerns about the government of Israel,” Gillibrand replied to the activist at the event.

Gillibrand’s comments alleging “concern” that Netanyahu does not have a peace plan overlooked that the Palestinians have turned down every Israeli statehood offer, some of which came from Netanyahu.

Specific and expansive Israeli territorial offers were made at Camp David in 2000, Taba in 2001, the Annapolis Conference in 2007 and more offers were made in 2008 and reportedly by Netanyahu in 2014. In each of these cases, the PA refused generous Israeli offers of statehood and bolted negotiations without counteroffers. Many times, the Palestinians responded to the offers by initiating violence, infamously including the Second Palestinian Intifada. Netanyahu has repeatedly and consistently called for the PA to return to the bargaining table.

Gillibrand also seems to have caved to pressure from anti-Israel groups at town halls pushing her to back away from the anti-BDS legislation.

A Netroots Nation bio for pro-Palestinian activist Rafael Shimunov boasts that he “led successful actions helping to reverse NY Senator Kirsten Gillibrand’s key support of a federal anti-BDS bill.” Shimunov is an early leader of the anti-Israel IfNotNow organization purporting to oppose Israeli “occupation” and is a founder of #JewsForLinda, which his bio describes as a “coalition of progressive Jews who actively stand and organize with Palestinian American activist Linda Sarsour.” Shumunov is also creative director for the far-left National Working Families Party, which Gillibrand aligned herself with last March when she joined one of the group’s events to accept their official endorsement for her senate campaign.

Gillibrand must decide whether she represents New York voters, many of whom strongly support Israel, or stands with the “progressive” anti-Israel elements she seems to be courting ahead of the 2020 race.