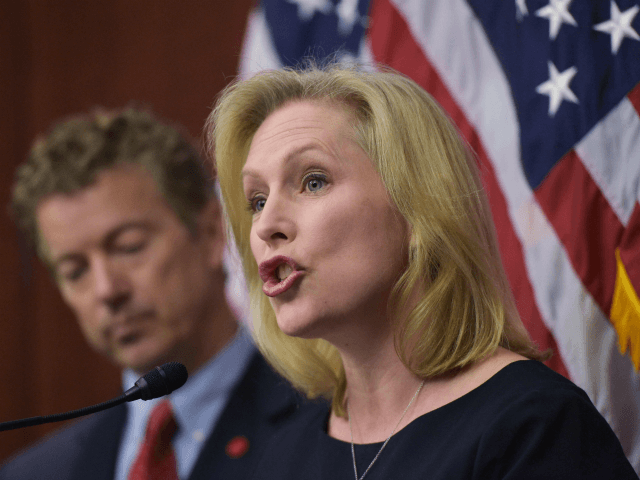 NEW YORK — Kirsten Gillibrand, the New York Senator running for reelection, has advanced troubling views, legislative decisions and associations that evidence an alarming ideology when it comes to support for America’s only democratic ally in the Middle East, the State of Israel.

In recent years, Gillibrand has seemingly moved away from traditionally mainstream Democratic politics when it comes to bipartisan support for the Jewish state. Below are five reasons Gillibrand is dangerous for Israel.

1 – Gillibrand broke from the mainstream of the Democratic party when she withdrew support from the “Israel Anti-Boycott Act,” which opposes the anti-Semitic Boycott, Divestment, Sanctions (BDS) movement targeting Israel.

The bipartisan bill would impose monetary penalties on those working in an “official commercial capacity” who support any international government’s efforts to boycott Israel.

Gillibrand withdrew her support for the pro-Israel legislation after meeting with the heavily George Soros-funded American Civil Liberties Union (ACLU) on the matter and her initial sponsorship for the anti-BDS bill was questioned at town halls by such radical anti-Israel groups as Jewish Voice for Peace and the U.S. Campaign for Palestinian Rights, both of which support the BDS movement.

The New York politician claimed she withdrew her support over charges that the legislation had some civil liberties issues. This even though free speech champions within her own party support the bill and reject the notion that the legislation impedes civil liberties. Gillibrand said she would support the bill if it was rewritten. “It has to be very specific that someone who is in favor of BDS can speak their mind and somebody who is against BDS can speak their mind, but you are always allowed to speak your mind,” she said.

There are indications that Gillibrand’s stunning move to withdraw support for the anti-BDS bill was more a political calculation than a decision meant to protect speech.

Sen. Ben Cardin (D-MD), one of the bill’s sponsors, explained that critics of the legislation misunderstand the bill when they claim there are free speech issues.

These warnings have caused two of the bill’s original co-sponsors, Sen. Ben Cardin, a Democrat from Maryland, and Rep. Rob Portman, an Ohio Republican, to publish a letter on Friday responding to accusations that the bill would endanger free speech. They wrote that the bill’s critics misunderstood its language and that despite the ACLU’s warnings, no U.S. citizen will face legal penalties for supporting a boycott of Israel under the new legislation.

The two congressmen explained in their letter that the most controversial part of the bill — the one detailing the criminal penalties for participating in boycotts of Israel — was in fact an expansion of a law, enacted in 1977, prohibiting U.S. companies from taking part in state-led boycotts of Israel. That bill was adopted in order to counter the Arab boycott of Israel. The new bill adds a new component to it, stipulating that the penalties for participating in a state-led boycott of Israel will also extend to participation in boycotts led by international governmental organizations such as the United Nations and the European Union.

A Netroots Nation bio for pro-Palestinian activist Rafael Shimunov boasts that he “led successful actions helping to reverse NY Senator Kirsten Gillibrand’s key support of a federal anti-BDS bill.” Shimunov is an early leader of the anti-Israel IfNotNow organization purporting to oppose Israeli “occupation” and is a founder of #JewsForLinda, which his bio describes as a “coalition of progressive Jews who actively stand and organize with Palestinian American activist Linda Sarsour.” Shumunov is also creative director for the far-left National Working Families Party, which Gillibrand aligned herself with last March when she joined one of the group’s events to accept their official endorsement for her senate campaign.

2 – Gillibrand provided key support for President Obama’s nuclear deal with Iran, which the Israeli government strongly opposed over security concerns. She also opposed Trump’s decision to leave the Iran accord in hopes of negotiating a better deal.

“I strongly oppose President Trump’s shortsighted and dangerous decision to leave the JCPOA,” she announced, referring to the nuclear agreement.

Her support for Obama’s nuclear accord was seen as helping to provide the administration with momentum in winning over other wavering Democrats.

Netanyahu saw Obama’s Iran deal as such a threat to Israeli and U.S. national security interests that just before a critical vote on the matter he took the unusual move of speaking out against a sitting president’s policies by addressing a joint meeting of Congress to warn about the nuclear agreement. The agreement “doesn’t block Iran’s path to the bomb; it paves Iran’s path to the bomb,” Netanyahu declared. “This is a bad deal. It’s a very bad deal. We’re better off without it.”

Gillibrand, meanwhile, keynoted the October 2017 “Brooklyn Conference” at the Brooklyn Museum, which featured Sarsour as a speaker on the same day. Another speaker that day was Alicia Garza, co-founder of Black Lives Matter, which supports the BDS movement. The main sponsor of the conference, as advertised in literature for the event, was George Soros’s Open Society Foundations. The Open Society supports scores of pro-BDS groups.

4  – Gillibrand sided with an anti-Israel activist who claimed the Israeli government does not respect Palestinian rights. She also criticized Prime Minister Benjamin Netanyahu, who offered the Palestinians a state on numerous occasions, as “not hav[ing] a plan for peace.”

“I am concerned that Prime Minister Netanyahu does not have a plan for peace, and doesn’t have a vision for peace,” Gillibrand said at a July 2017 town hall meeting in the Bronx.

Gillibrand was responding to a comment at the event from a self-identified activist with the anti-Israel Jewish Voice for Peace who had charged that he “was brought up to respect the rights of all people, and under current Israeli policy that is not happening with Palestinians.”

“I share your concerns about the government of Israel,” Gillibrand replied to the activist at the event.

Gillibrand’s comments alleging “concern” that Netanyahu does not have a peace plan overlooked that the Palestinians have turned down every Israeli statehood offer, some of which came from Netanyahu.

Specific and expansive Israeli territorial offers were made at Camp David in 2000, Taba in 2001, the Annapolis Conference in 2007 and more offers were made in 2008 and reportedly by Netanyahu in 2014. In each of these cases, the PA refused generous Israeli offers of statehood and bolted negotiations without counteroffers. Many times, the Palestinians responded to the offers by initiating violence, infamously including the Second Palestinian Intifada.

Netanyahu has repeatedly and consistently called for the PA to return to the bargaining table.