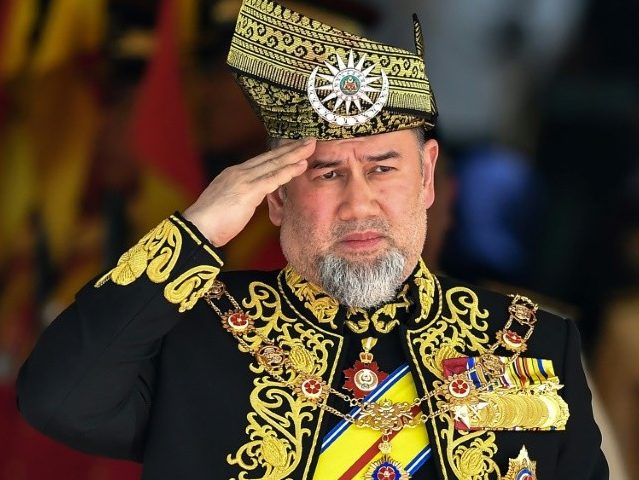 Malaysian King Sultan Muhammad V abruptly abdicated on Sunday after wearing the crown for only two years. The former 15th king of Malaysia did not explain why he departed early, but there is speculation it had something to do with his personal life.

“His Majesty tells the people of Malaysia to continue to be united to maintain unity, tolerance, and work together,” said the statement announcing the abdication.

The Associated Press noted on Sunday that the king just returned from a two-month medical leave in which he evidently journeyed to Moscow and married a “25-year-old former Russian beauty queen.” The wedding has not been confirmed by either the royal palace or Malaysia’s elected government, but foreign tabloids and websites have published photos of the ceremony.

The beauty queen in question, Oksana Voevodina, took the Miss Moscow title in 2015. She reportedly met the Malaysian king while he was traveling in Europe in 2017 and she was modeling luxury watches.

According to the Singapore Times (ST), Voevodina converted to Islam, changed her name to Rihana Oxana Gorbatenko, and married the king in an alcohol-free ceremony with halal food where the bride and groom donned “Malay traditional outfits.” Wedding photos posted on social media showed the bride wearing an Islamic headscarf.

The ST cited reports that the couple has visited a fertility clinic in Germany because Sultan Muhammad’s first marriage was childless and he is desperate to start a family. Muhammad seemed quite healthy and vigorous otherwise, with a penchant for extreme sports such as off-road driving, horse riding, football, and endurance challenges.

Muhammad V was the 15th king of Malaysia since it peacefully separated from the United Kingdom in 1957 and the first to abdicate. If he had remained on the throne, the 49-year-old monarch would have served only three more years, because Malaysia has a unique “rotational monarchy” in which the ceremonial royal office is passed between nine sultans. The throne has little practical power but great ceremonial importance, including the king’s role as symbolic head of Islam in Malaysia.

Malaysians expressed surprise and distress over the abdication on social media. “We Malaysians pray for his health and that he is protected by Allah. Long live the King!” former prime minister Datuk Seri Najib Razak said on Facebook.

The South China Morning Post saw a “game of thrones” getting underway in Malaysia as the Conference of Rulers, a body comprised of the nine eligible candidates for the crown plus a few non-voting provincial governors, meets to decide who the next king will be. The Conference of Rulers is scheduled to vote on January 24 and swear in a new king on January 31, although there is no legal deadline for installing a new king.

The SCMP explained why the decision may not be as simple as confirming the current “acting king” to hold the rest of Muhammad V’s term or tapping the next scheduled king to take over early:

Under the rotational system, the Sultan of Pahang state, Ahmad Shah, is next in line although the sultan is ailing according to local media, a rumour the palace has strenuously denied.

Johor’s Sultan Ibrahim Sultan Iskandar and Sultan Nazrin Shah of Perak, who is currently the deputy king and is carrying out the functions of the king until a new one is elected, are the next two names in the rotational system. Although the functions of the king are largely ceremonial, he also serves to safeguard Islam in Muslim-majority Malaysia, and must assent to the appointment of individuals for various senior government roles including that of prime minister.

Under the constitution, there are only three instances in which the ruler who is next on the list can be denied the position: if the royal is a minor, if the Conference of Rulers by secret ballot resolves that he is unsuitable by reason of infirmity of mind or body or any other cause to exercise the functions of king, or if he declines to take the position. The ballot would then move to the next ruler on the list.

In 2016, the Sultan of Johor claimed he had been offered the role of king, bypassing both Kelantan – Muhammad V’s home state – and Pahang, saying he had rejected the offer out of respect for the rotational system.

Malaysian political experts speculated that Sultan Ahmad Shah might abdicate his own position, citing his poor health, allowing his son to become sultan and king, or that Sultan Ibrahim Ismail of Johor might take the job he declined in 2016. One problem with that scenario is that Ismail supposedly does not get along well with Prime Minister Mahathir Mohamad, who has a long history of attempting to limit the powers of the monarchy and remove its immunity from prosecution.

The South China Morning Post recalled a few clashes between the prime minister and Muhammad V as well:

In May, after the general election that saw former governing coalition Barisan Nasional toppled for the first time in its 61-year rule, there was widespread speculation that the palace had delayed Mahathir’s swearing in as prime minister. In June, the government and the Agong reached an impasse regarding the appointment of ethnic Indian lawyer Tommy Thomas as attorney general, a position normally reserved for a member of the Malay-Muslim majority race – although the constitution does not specify a specific race, gender or religious requirement for the role. The Agong consented to the appointment after two weeks of the stand-off.

Muhammad V was also the ruler who handed democracy icon and prime minister-in-waiting Anwar Ibrahim a royal pardon in May, wiping clean his record of multiple charges of sodomy and corruption and releasing him from prison.

CNN reported on Monday that at least six members of the Conference of Rulers have already met to discuss who will succeed Muhammad V, and in fact might have prodded him to abdicate, either because they were unhappy with his choice of fiancee or because they thought he was not well-suited to handle an era of “fundamental change in Malaysia.”