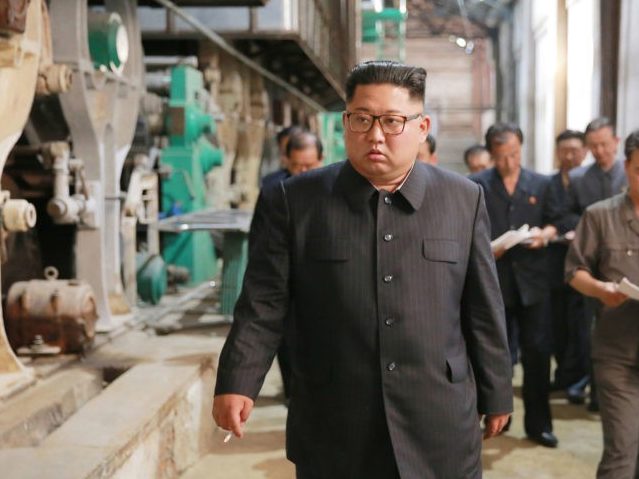 North Korean media clearly intended the report to be provocative, but South Korean analysts shrugged it off as testing for a battlefield rocket launcher that would have little impact on arms control negotiations.

“The state-of-the-art weapon that has been long developed under the leadership of our party’s dynamic leadership has a meaning of completely safeguarding our territory and significantly improving the combat power of our people’s army,” North Korean media reported breathlessly on Friday.

“The testing of the high-tech tactical weapon has been carried out successfully, meeting all superior and powerful designing indicators,” the report added.

Kim Jong-un took credit for completing an important military project launched by his father and predecessor, Kim Jong-il, and congratulated the scientists who made the breakthrough possible.

“This result today is a justification of the party’s policy focused on defense science and technology, another display of our rapidly growing defense capabilities to the whole region, and a groundbreaking change in strengthening our military’s combat capabilities,” the dictator declared.

This sensational report gives the impression North Korea just tested a game-changing weapon on par with its Hwasong-15 missile, which was test-launched in 2017 under Kim’s supervision and is regarded by military analysts as North Korea’s first truly reliable intercontinental ballistic missile.

Josh Pollack of the Middlebury Institute of International Studies told CNN the weapons test represented Kim Jong-un “tiptoeing towards a more aggressive posture in negotiations with the U.S.” and “signaling that he’s not going to give way and can simply return to his old practices.”

“It’s North Korea-style coercive diplomacy. North Korea is saying ‘If you don’t listen to us, you will face political burdens,’” analyst Shin Beom-chul of the Asan Institute for Policy Studies in Seoul told the Associated Press.

On the other hand, a source in the South Korean government told CNN the weapon tested by North Korea was merely an artillery piece, most likely a “multiple rocket launcher.”

“As it is a tactical weapon test, we do not view it as a North Korean military provocation,” the source said.

South Korea’s Yonhap News quoted speculation from South Korean analysts and the Unification Ministry that the weapons test was primarily a theatrical performance for domestic consumption, to be interpreted as a gesture of defiance against international sanctions and celebrated as an achievement of North Korean science and industry.

Pyongyang’s message was mixed with the announcement on Friday that U.S. citizen Bruce Byron Lowrance, arrested after he entered North Korea on October 16 and accused by the Kim regime of working under “the control of the U.S. Central Intelligence Agency,” will be released.

North Korea’s history of using prisoners as bargaining chips and brutalizing them in prison prompted cautious applause for Lowrance’s release as a positive development.

“As North Korea clearly could have held this American citizen to gain leverage in up and down nuclear negotiations, that Pyongyang released this person is a good a sign. However, one good deed does not mean all is well in U.S.-North Korea relations,” Center for the National Interest director of defense studies Harry Kazianis told Newsweek on Friday.

“With Pyongyang testing what appears to some sort of new weapon as well as voicing its anger in state media over and over that negotiations with Washington are not where they want them to be, we should continue to watch the Korean Peninsula very carefully,” Kazianis advised.