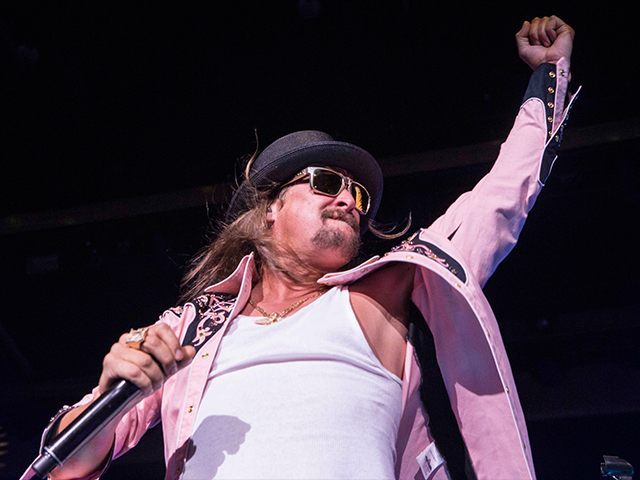 Kid Rock reportedly planned to lead the annual Nashville Christmas Parade despite his firing as grand marshal after his off-color remarks about ABC’s Joy Behar.

Organizers of the event moved ahead and appointed James Shaw Jr. as the marshal in place of the rocker. Shaw was the man who in April disarmed a crazed gunman at a Nashville Waffle House restaurant saving several lives.

Despite being replaced, at least one member of Kid Rock’s retinue says the rocker had intended to show up to lead the parade.
Bryan Lewis, the attorney for Rock’s best friend and parade patron Steve Smith, told the entertainment industry magazine that Rock “will show up and is going to try to participate as grand marshal tomorrow.”

“My best analogy is it’ll be a standoff at high noon,” Lewis said of a likely confrontation between Kid Rock and the committee running the parade.

Kid Rock didn’t make a scene during Saturday’s 65th annual Christmas parade and reportedly watched the parade from his honky-tonk on Broadway.

“Well folks, it’s official. My parade has been rained on,” Rock wrote on Instagram Saturday, posing with his granddaughter. “But in the end, it’s not about me. It is about the kids and the wonderful they do at Vanderbilt Children’s Hospital. Sending well wishes for a break in the rain and a successful parade.”

The parade committee explained its reasoning for eliminating Rock as grand marshal on Friday. “Parade organizers feel that the grand marshal should personify the spirit of the Nashville community and have invited James Shaw, Jr., who became a community hero after stopping a shooting at a local Waffle House earlier this year, to be honored,” they said

Rock was removed quickly after he called ABC The View host a “bitch” during a live TV interview with Fox & Friends on Friday morning.

As a way to decry political correctness, Rock told host Steve Doocy, “God forbid you say something a little bit wrong you’re racist, homophobic, Islamophobic… people need to calm down, a get a little less politically correct, and, I would say love everybody. Except I’d say screw that Joy Behar bitch, everybody but that.”

For his part, Rock apologized for using the curse word live on the air but did not apologize for the sentiment he was trying to relay.

“Behar has been an outspoken critic of President Donald Trump, and when myself, Sarah Palin and Ted Nugent visited the White House last year, Behar called it ‘the saddest day in the history of the White House since the British burned it to the ground in 1814,’” Rock said in a statement released later on Friday. “Today I said ‘Screw that Joy Behar bitch.’ Mess with the bull, you get the horns. End of story. I apologized for cursing on live TV, I will not for my sentiment nor do I expect an apology from her or anyone else who has choice words for me or doesn’t like me. God Bless America.”