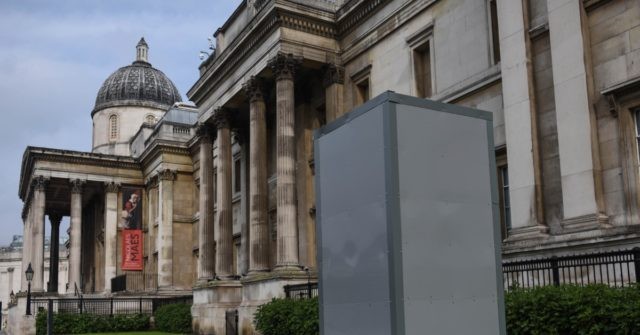 The first president of the United States, George Washington, has joined the likes of Sir Winston Churchill and Mahatma Gandhi among historic figures that have had their statues covered up in London over fears of vandalism by Black Lives Matter activists.

At the behest of Mayor Sadiq Khan, the statue honouring General Washington was entombed in a dystopian grey box, in lieu of police actively preventing acts of vandalism by radical leftists.

The statue depicting the leader of the American Revolution was gifted to the people of the United Kingdom in 1921 from the Commonwealth of Virginia and is located outside the National Gallery in Trafalgar Square — the site of a BLM protest and anti-vandalisation counter-protest on Saturday.

There is a popular legend surrounding the Washington statue in Trafalgar Square, which claims that the statue actually sits atop soil brought from the United States, so that the Revolutionary War hero’s claim that he would “never set foot in London again!” would remain true.

Churchill Statue Imprisoned In Grey Box to Protect It from BLM Vandals https://t.co/eo22i9cx6Z

The decision to cover the statue comes a week after Black Lives Matter protesters defaced the monument of another American president, Abraham Lincoln, the Republican president responsible for freeing the slaves after leading Union forces against the Democrat-led Confederacy in the Civil War.

Despite Lincoln losing his life to an assassin for fighting for black Americans, BLM protesters still deemed his monument worthy of desecration, scrawling “RACISM IS A PANDEMIC TOO”, “SILENCE IS VIOLENCE”, “BLM”, and “ABOLISH THE POLICE” on his statue.

Statues across the country have been targetted for removal following the destruction of Edward Colston, a 17th-century parliamentarian and philanthropist, over his ties to the slave trade. Since then, the hard-left Stop Trump Coalition has drafted a hit-list of historical monuments and statues that it deems too offensive to remain standing.

Washington’s statue was a likely vandalism target for Black Lives Matter activists over his ownership of slaves in the 1700s. Washington opposed the practice and freed all of his slaves at the time of his death in 1799.

“I never mean (unless some particular circumstance should compel me to it) to possess another slave by purchase: it being among my first wishes to see some plan adopted by the legislature by which slavery in the country may be abolished by slow, sure, & imperceptible degrees,” Washington said in 1786.

On Saturday, thousands of British citizens, football fans, and veterans — characterised by the mainstream media as ‘far-right thugs’ — came out in force to stand guard around the nation’s historical monuments, against the left-wing iconoclasm sweeping throughout the nation.