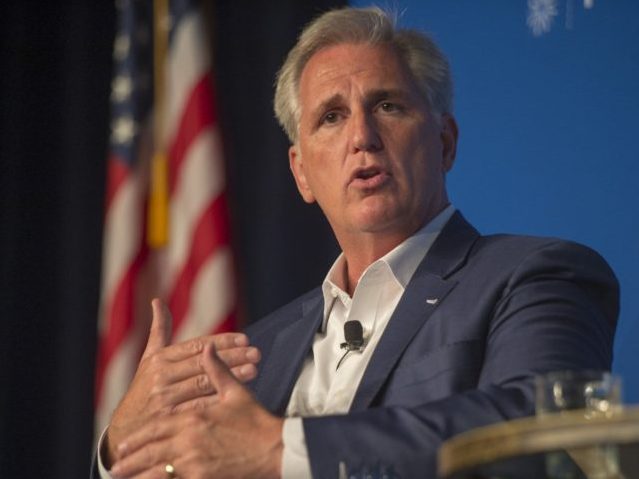 McCarthy announced his bid to run as House Minority Leader in the next congressional term after Democrats gained a majority in the House during the 2018 midterms.

McCarthy said in a letter to House Republicans on Wednesday:

Today is a difficult day. Our members competed hard across the country. But after months of enduring nonstop biased attacks and unprecedented liberal resources, we came short of defying history and holding the House. Even so, we should not let last night’s results diminish the great gains President Trump and our majority have delivered.

“I helped build a majority from a deeper hole than this and I have what it takes to do it again,” the California Republican added. “That is why I have decided to run for Republican Leader and humbly ask for your support.”

McCarthy said, “We have seen where Democrats want to take our country — open borders, government-run healthcare, impeaching President Trump, and crushing debt for our kids and grandkids. We simply cannot let that happen.”

McCarthy faces a competitive challenge from Rep. Jordan, who represents the conservative wing of the House Republican conference.

“In 2016, the American people elected Republicans to come here and change this town,” Jordan contended. “I think the president is doing just that, but I don’t think they see the same intensity from folks in Congress, folks in the House of Representatives.”

Congressman Jordan also challenged the current Republican leadership’s tactics, noting that they did not engage with House Democrats.

Jordan said, “Now that we’re in the minority, that’s about all what we can do is debate, but fight hard in the debate for the principles, for the things that we know the American people sent us here to do in 2016. Show them that we deserve to be back in power in 2020.”