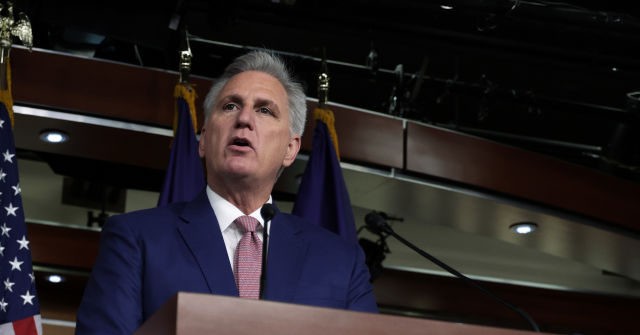 “President Biden believes the greatest threat to the homeland is any American using their First Amendment right to question the Government,” McCarthy responded. “State-sponsored threats against free speech are un-American. Mayorkas should rescind this intimidation tactic immediately.”

President Biden believes the greatest threat to the homeland is any American using their First Amendment right to question the Government. State-sponsored threats against free speech are un-American.

Key factors contributing to the current heightened threat environment include:
1. The proliferation of false or misleading narratives, which sow discord or undermine public trust in U.S. government institutions:
For example, there is widespread online proliferation of false or misleading narratives regarding unsubstantiated widespread election fraud and COVID-19. Grievances associated with these themes inspired violent extremist attacks during 2021.

In a press statement, Mayorkas said:

The United States remains in a heightened threat environment fueled by several factors, including an online environment filled with false or misleading narratives and conspiracy theories, and other forms of mis- dis- and mal-information (MDM) introduced and/or amplified by foreign and domestic threat actors. These threat actors seek to exacerbate societal friction to sow discord and undermine public trust in government institutions to encourage unrest, which could potentially inspire acts of violence. Mass casualty attacks and other acts of targeted violence conducted by lone offenders and small groups acting in furtherance of ideological beliefs and/or personal grievances pose an ongoing threat to the nation.

While the conditions underlying the heightened threat landscape have not significantly changed over the last year, the convergence of the following factors has increased the volatility, unpredictability, and complexity of the threat environment: (1) the proliferation of false or misleading narratives, which sow discord or undermine public trust in U.S. government institutions; (2) continued calls for violence directed at U.S. critical infrastructure; soft targets and mass gatherings; faith-based institutions, such as churches, synagogues, and mosques; institutions of higher education; racial and religious minorities; government facilities and personnel, including law enforcement and the military; the media; and perceived ideological opponents; and (3) calls by foreign terrorist organizations for attacks on the United States based on recent events.

Since January 2021, DHS has taken several steps in this regard, including … increased efforts to identify and evaluate MDM. including false or misleading narratives and conspiracy theories spread on social media and other online platforms, that endorse violence.

Mayorkas is a Cuban refugee and pro-migration radical who is refusing to enforce the nation’s border or deportation laws, despite the mounting death toll and economic pain. He combines his laxity on Americans’ border and workplace laws with an alarmist view of the resulting democratic debate amid the immigration-fuelled cultural conflict.

In 2021, Mayorkas allowed roughly 1.5 million migrants across the southern border and is on track to admit roughly 2 million in 2022. His pro-migration policies helped U.S. employers sideline many Americans and minimize wage gains for many millions of Americans.

Mayorkas’ migration is so large that it adds roughly one migrant to the population for every two American births.

“Our Homeland Security is more concerned about citizens having contrarian views than about illegal aliens breaking our immigration laws,” responded Rob Law, a former top staffer at the U.S. Citizenship and Immigration Services agency. He continued:

Secretary Mayorkas has made clear that [he thinks] unlawful presence [illegal migration] is not something that warrants enforcement. But apparently, DHS is more concerned with some Americans having the wrong thinking on elections. That’s where [Mayorkas thinks] their limited enforcement resources should be devoted.

The Biden Administration is now defining “misinformation” as a terrorist threat – in a blatant attack on free speech. https://t.co/f4ngTrQzmN