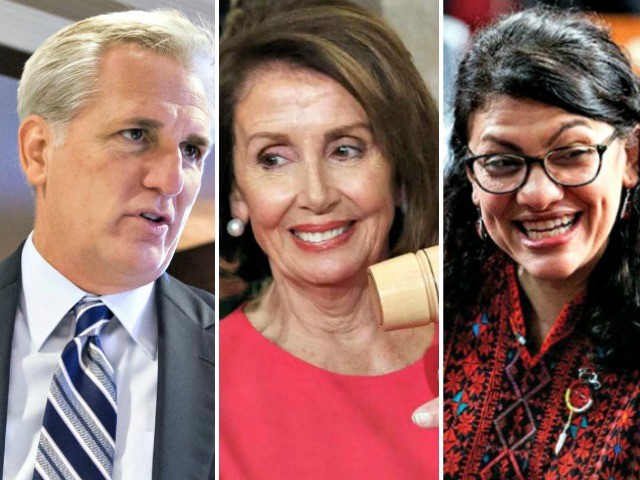 U.S. House Minority Leader Kevin McCarthy (R-CA) reacted Thursday to Rep. Rashida Tlaib’s (D-MI) profane statement about impeaching the president and said Nancy Pelosi (D-CA), who was just elected Speaker of the House for the second time, should have a conversation with Tlaib.

At a reception hosted by the far-left MoveOn.org organization Thursday evening, Tlaib said, “We’re gonna impeach that motherfucker,” and was greeted with raucous, sustained applause.

“She is the Speaker of the House. She is also the head of the Democratic party,” McCarthy said of Pelosi. “She has a new freshman, incoming individual, that uses that type of language that has a determination of what she is going to do with no facts on the basis. I think this is a role, as a leader and the Speaker, to have a conversation with this member on whether she approves of this or not.”

McCarthy then questioned the seriousness of the new House majority:

Are the House majority going to be serious about anything?  I sat up on the dais, provided the gavel to the new Speaker, talked about ways we could work together, laid out firm core principles that we would not compromise on and then we see this language going forward. How do you work with anybody if this is what they really have planned? That they go down into a place that they have a move on they think others aren’t watching it. Using foul language, they introduce that they just want to impeach the president. Over what basis? We have a government shutdown right now. Where are their priorities? We gave them an opportunity to show their priorities that yes they are committed to the American people, they’ll put the people before politics, we’ll open government back up and make sure we are able to secure our borders. No. They voted no. Every single new freshman Democrat that came in just decided to pick politics over the country, and that was wrong.

McCarthy strongly criticized both Pelosi and Talib as he concluded taking questions from reporters.

“We watched a new freshman stand up, use this language, get cheered by their base and we watched a brand new Speaker say nothing to her. That is not the body of what we serve in and that action should not stand. Somebody should stand up to it. She is the Speaker. That individual serves in her caucus.”