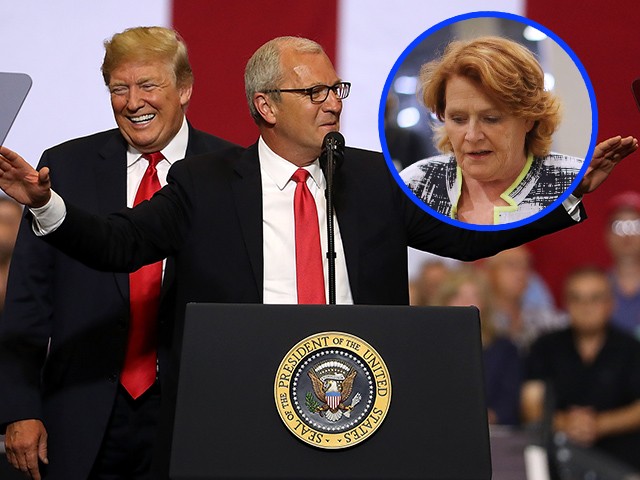 Rep. Kevin Cramer (R-ND) defeated Sen. Heidi Heitkamp (D-ND) in the North Dakota Senate race on Tuesday, serving as a rebuke to one of the nation’s most vulnerable red-state Democrats, according to Fox News.

“Thank you North Dakota. Representing you in the United States Senate will be the honor of a lifetime,” Cramer wrote in a tweet on Tuesday night.

Thank you North Dakota. Representing you in the United States Senate will be the honor of a lifetime. pic.twitter.com/r6Xi9qCQMS

Congratulations to Senator-elect Kevin Cramer on his well-deserved victory. This is a win for the people of North Dakota and a clear rebuke of the liberal policies and harmful actions that defined Heidi Heitkamp and her campaign. For the first time in decades, this Senate seat will be filled by someone who puts North Dakota first.

Cramer won the North Dakota Senate election on Tuesday against one of the Senate’s most vulnerable Democrats, alongside Sens. Joe Donnelly (D-IN), and Claire McCaskill (D-MO).

Heitkamp was a quintessential “red state Democrat,” representing a state President Trump won by more than 35 points during the 2016 presidential election. However, as the Senate election progressed, her leftist tendencies became more apparent to voters and the polls showed Cramer growing in the polls.

Heitkamp signaled her openness to supporting Judge Brett Kavanaugh for the Supreme Court, even though she ultimately decided to oppose him, despite the wishes of her constituents.

After Heitkamp announced that she will oppose Kavanaugh’s nomination to the Supreme Court, Cramer said that she had rejected North Dakotans and sided with Senate Minority Leader Chuck Schumer (D-NY).

Scandal inflamed Heitkamp’s campaign in October when she ran a campaign ad labeling several women, without their consent, as sexual assault survivors in an attempt to attack Rep. Cramer. The controversy rocked Heitkamp’s campaign, preventing a late comeback for the North Dakota Democrat as three polls had Cramer leading Heitkamp by at least nine points.

In an October interview, Heitkamp said that she “pretty much” suspended her campaign after outing several women as victims of sexual assault.

“Nearly one week after Heidi Heitkamp outed victims of sexual assault without their consent, she is still not being truthful,” said North Dakota Republican Party Communications Director Jake Wilkins. “Many victims said this horrible tragedy ruined their lives, yet Heidi Heitkamp is dead set on continuing to lie to them and to the people of North Dakota.”

Further damaging her campaign, a Project Veritas video released in October recorded Heitkamp’s staff admitted that the North Dakota senator would be “super liberal if she wins the Senate election.”

Staffers also admitted to taking down an Obama poster “when the press comes.”