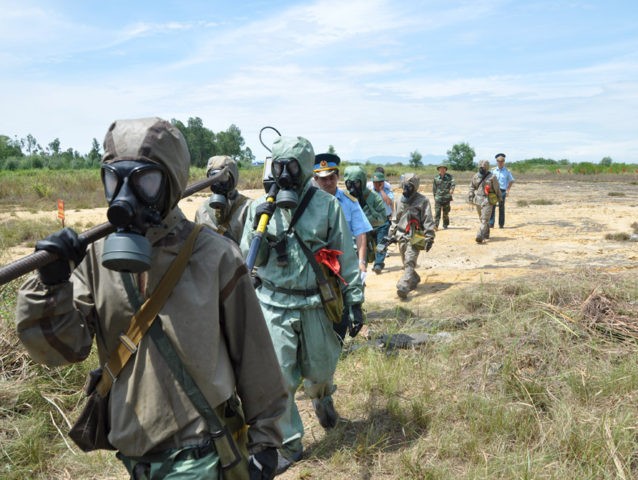 Kelley Beaucar Vlahos said when she first began to hear stories of Gulf War veterans coming home and suffering from unexplained health problems, it immediately resonated with her, as the relative of several Vietnam veterans.

The executive editor of The American Conservative magazine said as a cub reporter, she had covered veterans issues, and heard from veterans about the effects of Agent Orange, the defoliant used by the U.S. military in Vietnam during the bloody Vietnam War from 1961 to 1971.

“We were seeing reports in the news about [Gulf War] veterans coming home, or they had been home for a year or two — experiencing unexplained symptoms — chronic fatigue, joint pain, cognitive issues, respiratory issues. This to me resonated with what I had known growing up and reporting about the systems from Agent Orange,” she said. “So I was on the alert.”

Vlahos spoke recently about the environmental and health impacts of war at an event hosted this month by the The Committee for Responsible Foreign Policy (CRFP), a non-profit that calls for a realistic and restrained foreign policy.

Vlahos said that like Vietnam veterans who were exposed to Agent Orange, Gulf War veterans exposed to burn pits did not immediately receive the care and attention they needed.

“It’s been a slow twisty long road for those particular Persian Gulf veterans,” she said.

Those who faced the most severe symptoms had worked and lived near burn pits — giant pits that would burn any kind of waste — cars, tires, batteries, chemicals, food, body parts, and all other sorts of debris. The pits were “right at the edge of the barracks.” Troops were coughing up black stuff they referred to as “Iraqi crud.” The pits operated until 2015, she said.

“We sent our troops there with absolutely no protection from air pollution and actively contaminated them,” she said. “We found over a course of 25 years they had been exposed to a number of things.”

“The saying, ‘Never again, never forget,’ just did not apply here,” she said.

She said Gulf War veterans were also exposed to a number of chemicals: pesticides; tablets to protect them from chemical weapons; anthrax vaccines that were unregulated; dust; depleted uranium (DU) to shield tanks and coat bullets; and sarin.

“Throw all that together and you have a toxic stew,” she said.

Now-retired Navy Capt. Mark Lyles, who served as the chairman of medical sciences and biotechnology at the Center for Naval Warfare Studies at the Naval War College, found that tiny micro-particles of dust in Iraq and Kuwait contain 37 metals, and 147 types of bacteria and disease-spreading fungi.

“It was like breathing in peanut butter,” she said. A typical U.S. household would have 1 microgram or less per cubic meter, she said.

Gulf War veterans began coming home after the war with strange symptoms and illnesses. They were no longer able to walk to the mailbox without feeling out of breath. They were being diagnosed with adult asthma and other respiratory issues, pulmonary issues, meningitis, cystic fibrosis, rare pneumonia, and skin lesions.

Vlahos met a veteran who was losing feeling in his legs slowly. Another in his twenties was diagnosed with bronchiolitis, and was no longer able get up from the bed or couch without assistance from his wife. Minnesota Air National Guard Tech Sgt. Amie Muller was just 36 years old, when she died from a rare form of pancreatic cancer.

Vlahos said today it is still an uphill climb for Gulf War veterans to receive recognition that their illnesses may be tied to their tours. It has been suggested that their symptoms are psychosomatic, they just want to get compensated, and that they are just trying to throw themselves into the Vietnam cohort so they can get disability, she said.

It is still going on, she said. A Gulf War registry has been started, but no one really knows what it does, she said. “The information is kept somewhere, but they’ve had to fight tooth and nail to get compensation.”

“The government will not come to terms with its responsibility to our veterans and what they did,” she said. “It’s really hard when you’re dealing with the blob of the VA.”

Vlahos also discussed the effects on Iraqi civilians. There were a spike of birth defects in Fallujah, Iraq, she said. After the U.S. pummeled Iraq with bombs tipped with DU, hospitals started reporting high levels of birth defects among babies, some with two heads or one eye. She said at the peak of these reports, 13 percent of babies in Fallujah had some sort of birth defect, compared to a 6 percent occurrence world wide and 3 percent in America.

She said under pressure from the U.S., the World Health Organization found they could not relate the defects to the environmental impact of the Gulf War.

“The United States would be responsible for those children. To this day we have not acknowledged our responsibility of destroying those cities,” she said.

Vlahos said the U.S. government has still not come to terms with ordering the use of Agent Orange in the Vietnam War. The Vietnamese government is still fighting for compensation, she said. Today, non-governmental organizations are still trying to deal with the aftereffects.

“They are still cleaning up the land there,” she said.