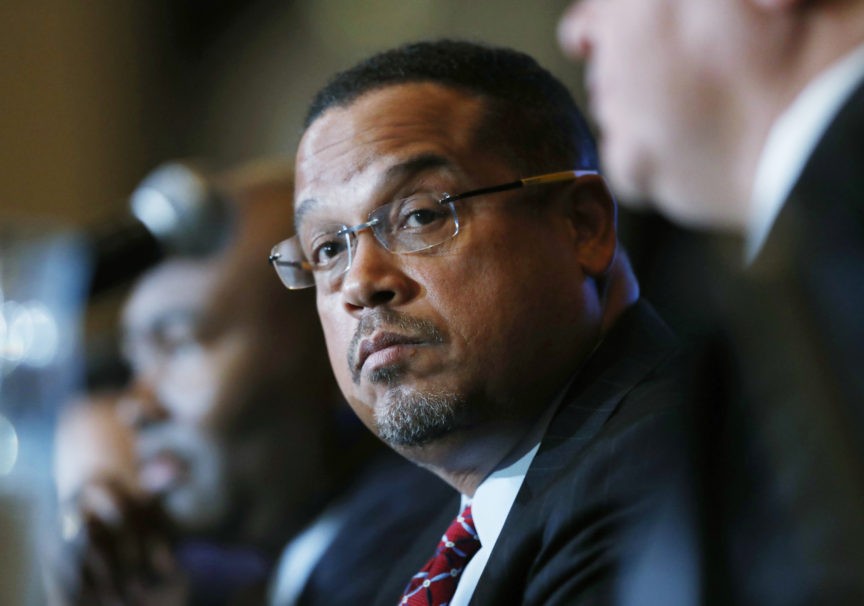 Rep. Keith Ellison (D-MN), under fire amid allegations of domestic abuse, revealed in a radio interview with WCCO Wednesday that he is considering stepping down as Democratic National Committee deputy chair to focus solely on his bid to become Minnesota’s next attorney general.

Asked if his leadership role at DNC will continue just 34 days out from the November midterm election, Ellison replied, “You know, I’ve been evaluating that recently, so we’ll see.”

“I need to put 100 percent of my time, energy, and resources into the race and my office, so it is something I am considering,” the Congressman said of his candidacy for Minnesota attorney general.

Housley said in a statement:

According to Monahan, Ellison subjected her to “narcissist abuse,” causing her hair to fall out. “Narcissist abuse is very difficult to understand,” Monahan said of Ellison’s alleged behavior. “It’s the gaslighting, it’s the habitual lying, it’s the making it seem like it was my fault for even asking why something happened.”

“It was crazy-making,” Monahan said. “My hair was falling out, I was anemic — narcissist abuse is horrid.” Monahan said:

In a sit-down interview with CBN News, Monahan claims to have recently met with Ellison, who expressed worry over her public advocacy for the #MeeToo movement. Monahan said:

He met with me at a coffee shop closer to my place that evening, before he ran for [Attorney General]. The conversation went straight to ‘Hey, you know, I noticed that you’ve been tweeting a lot, you know, about abuse and the #MeToo, and over months talking about your own [personal experience]. Are you going to keep tweeting about this? I don’t want to have to look over my shoulder all the time, wondering when you’re going to tweet something, and say it’s me’.

On Monday, the Democratic-Farmer-Labor Party in Minnesota announced it wrapped up its investigation into the accusations after concluding the allegations were unsupportable. “The investigation report, which was released today without our knowledge by someone outside of our organization, was unable to substantiate the claim of physical abuse made by Ms. Monahan,” a statement by DFL Chair Ken Martin reads.

In late September, Ellison said he would ask the House Committee on Ethics to investigate Monahan’s claims. “Today I am announcing that I will submit a request for a House Ethics Committee investigation into allegations against me raised by a former partner,” the Minnesota Democrat said in a statement. “I am taking this step now because I am innocent and eager to see this entire matter resolved.”