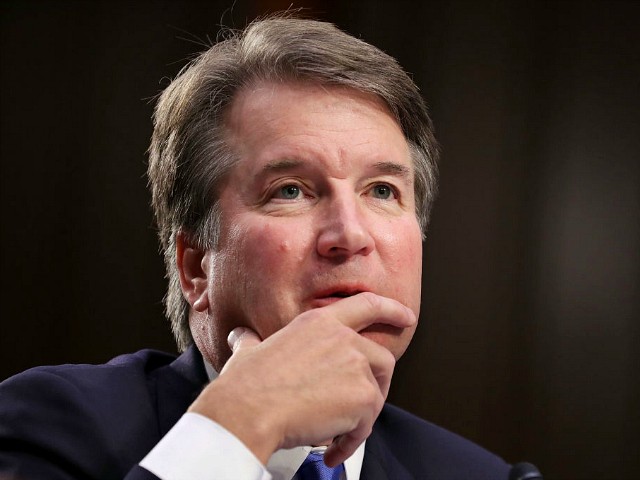 The call, conducted under threat of criminal penalty for lying, reveals an exasperated Kavanaugh countering accusation after accusation, likening his situation to an episode of The Twilight Zone.

The transcript reveals previously unknown details and one heretofore unrevealed accusation involving Kavanaugh and a man, suggested to be Mark Judge, sexually assaulting a woman on a boat off the coast of Newport, Rhode Island, in 1985, only to be confronted the next morning by two men who then severely beat Kavanaugh and Judge.

This new fifth accuser, according to the Senate Judiciary Committee staffer on the call, conveyed his allegations by telephone on Monday to Sen. Sheldon Whitehouse (D-RI). The staffer then read Whitehouse’s office’s report over the phone:

Senator Whitehouse received a call this morning from a Rhode Island constituent, [REDACTED], who made allegations regarding U.S. Supreme Court nominee Brett Kavanaugh. [REDACTED] reported that early on a Sunday morning in August of 1985, a close acquaintance of the constituent was sexually assaulted by two heavily inebriated men she referred to at the time as Brett and Mark.

The event took place on a 36-foot maroon and white boat in the harbor at Newport, Rhode Island, after the three had met at a local bar. According to [REDACTED], when he learned of the assault at approximately 5:00 a.m. that same morning, he and another individual went to the harbor, located the boat the victim had described and physically confronted the two men, leaving them with significant injuries.

[REDACTED] recently realized that one of the men was Brett Kavanaugh when he saw Kavanaugh’s high school yearbook photo on television over the weekend. He promptly reported the incident to our office on Monday morning, September 24, 2018.

The newest accuser’s name is left redacted in the transcript, but reporters quickly identified the Twitter account quoted in the same transcript as making repeated calls for the U.S. military to carry out a coup against President Donald Trump. The Twitter account belongs to a man named Jeffrey Catalan. As Fox News’s Alex Pfeiffer pointed out, the same account also suggested Donald Trump killed someone in 1983:

He has also accused Trump of murder. https://t.co/ktZcbt6215

As reporters began to swarm the Catalan account, it appeared to withdraw his claims of having beaten Kavanaugh up for raping someone, saying, “Do [sic] everyone who is going crazy about what I had said I have recanted because I have made a mistake and apologize for such mistake”:

On Monday, days before this apparent retraction, Kavanaugh categorically denied Catalan’s accusation, saying, “I was not in Newport, haven’t been on a boat in Newport. Not with Mark Judge on a boat, nor all those three things combined. This is just completely made up, or at least not me. I don’t know what they’re referring to.”

Also first unveiled in the transcript are new details of the fourth accusation, an anonymous letter alleging Kavanaugh “shoved” the writer’s daughter’s friend “up against the wall very aggressively and sexually” after leaving a bar together in 1998. The letter is revealed to have originated in Denver, Colorado. The unnamed daughter is supposedly from Boulder, Colorado. And Kavanaugh is said to have been “dating” the women he shoved.

“[W]e’re dealing with an anonymous letter about an anonymous person and an anonymous friend. It’s ridiculous. Total twilight zone. And no, I’ve never done anything like that,” Kavanaugh responded.

When a staffer asked Kavanaugh about dating the unnamed woman in the letter, Kavanaugh pointed out that the accusation provides nothing that could identify the woman in question in the following exchange:

Staffer: While you were involved in the Starr investigation, do you recall ever dating a woman who would fairly fit the description in the letter provided to Senator [Cory] Gardner [(R-CO)]? The anonymous letter.

Staffer: Just based on what I —

Judge Kavanaugh: Well, then I don’t know what I’m responding to then.

In his most in-depth answers so far revealed about his second accuser, Deborah Ramirez, Kavanaugh again denied having exposed himself to her in a drunken dormitory common room party his freshman year of college. He acknowledges the two knew each other in college, describing their relationship as “friendly, but not friends.” Kavanaugh’s confirmed the two had seen each since college, most recently at a mutual classmate’s wedding, where, as Ronan Farrow and Jane Mayer’s New Yorker story noted, she did not mention the alleged incident and posed “smiling” in photographs with Kavanaugh.

“I’m sure I saw her because it wasn’t a huge wedding. And at any wedding, you would see the people that you went to school with. But I don’t have a specific recollection,” Kavanaugh said.

James Roche, Kavanaugh’s freshman roommate — who told reporters that Kavanaugh was an excessive drinker and that he believed Ramirez, who was a close college friend, despite having no recollection of such an incident — also came up in the questioning. Kavanaugh claimed Roche, who then went by Jamie, “hated” their third roommate, Dave White:

Jamie and Dave White hated each other. They got in fights, fist fights during the year. One time Dave White was away for the weekend. Jamie — when he came back, Jamie had moved all Dave White’s furniture, everything, like into some other area of Lawrence Hall in a hallway.

I was friends with Dave White more than Jamie. I tried to be civil. Jamie wasn’t around a lot. I don’t know, I think his parents lived nearby, and so he was elsewhere or with a girl, I don’t know, a woman at Yale. [REDACTED] He didn’t hang out with us very much, wasn’t a great situation.

The transcript also includes extensive questioning about Kavanaugh’s high school yearbook that anti-trump activist and attorney Michael Avenatti has claimed contains secret codes about sexually assaulting girls. In one exchange, Kavanaugh explained that “devil’s triangle” referred to a drinking game he’d played in high school, not, as Avenatti claimed, a lewd sex act. Asked why he included the reference, Kavanaugh responded, “I don’t know. We were 17.”

Kavanaugh’s first use of the phrase “twilight zone,” which he also used in response to Avenatti’s client Julie Swetnick’s claims, occurs when discussing how “outraged” he is by the New York/Deborah Ramirez story:

The New York Times says as recently as last week, she  was calling around to other classmates saying she wasn’t sure I had done this. And you know, I think — I think we’re — this is an outrage for this kind of thin, uncorroborated, 35-year-old accusation to be leveled in this fashion at this time. I’ve been in the public eye for 24 years, since I started with the independent counsel in the fall of 1994, very public at various points in my life. I’ve been through six background checks. I worked in the White House at the highest levels, senior staff, traveling with the President all over the world, seeing the most highly sensitive secrets of our Nation for years. I went through a difficult confirmation process for the D.C. Circuit that was public with two separate confirmation hearings in 2004 and 2006.

I’ve been a judge for 12 years in a very public way. I’ve been identified repeatedly as a potential Supreme Court nominee. Whether that was accurate or not, I’ve been publicly identified. My decisions have been publicly discussed. I’ve been very much a presence at the Yale College reunions. I’ve been on multiple panels there. So I’ve been active in the class. The class newsletter has talked about me. The people in my class have been at those reunions and those events.

In all that time, not a word. And then 4 days, you know, when just right before a vote for the Supreme Court, after the nomination itself has been pending for months,  and I’ve been through the hearings and 65 Senate meetings and all the written questions, and then — and then, after all these years, with all this time, and all these descriptions with no corroboration and with her best friend saying she never heard about it, you know, I’m — I’m really just, you know, stunned. And outraged.

Kavanaugh will testify in an open hearing Thursday morning to answer allegations from his first accuser, Dr. Christine Blasey Ford.