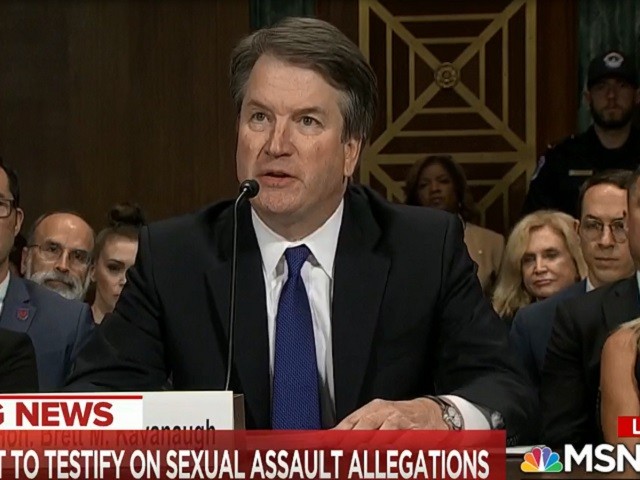 During his opening statement before the Senate Judiciary Committee on Thursday, Supreme Court nominee Judge Brett Kavanaugh said, “This whole two-week effort has been a calculated and orchestrated political hit,” accused Democrats of turning advice and consent into search and destroy, and stated to them, “You sowed the wind for decades to come. I fear that the whole country will reap the whirlwind.”

Kavanaugh stated, “This confirmation process has become a national disgrace. The Constitution gives the Senate an important role in the confirmation process, but you have replaced advice and consent with search and destroy. Since my nomination in July, there has been a frenzy on the left to come up with something, anything, to block my confirmation.”

After reading statements from Democrats about his nomination, Kavanaugh said, “I would say to those senators, your words have meaning. Millions of Americans listened carefully to you. Given comments like those, is it any surprise that people have been willing to do anything, to make any physical threat against my family, to send any violent email to my wife, to make any kind of allegation against me and against my friends, to blow me up and take me down? You sowed the wind for decades to come. I fear that the whole country will reap the whirlwind.”

Kavanaugh continued, “The behavior of several of the Democratic members of this committee at my hearing a few weeks ago was an embarrassment, but at least it was just a good old-fashioned attempt at Borking. Those efforts didn’t work. When I did at least okay enough at the hearings that it looked like I might actually get confirmed, a new tactic was needed. Some of you were lying in wait and had it ready. This first allegation was held in secret for weeks by a Democratic member of this committee and by staff. It would be needed only if you couldn’t take me out on the merits. When it was needed, this allegation was unleashed and publicly deployed, over Dr. Ford’s wishes. And then, as no doubt was expected, if not planned, came a long series of false, last-minute smears designed to scare me and drive me out of the process before any hearing occurred. Crazy stuff, gangs, illegitimate children, fights on boats in Rhode Island, all nonsense, reported breathlessly and often uncritically by the media.”

He continued, “This has destroyed my family and my good name, a good name built up through decades of very hard work and public service at the highest levels of the American government. This whole two-week effort has been a calculated and orchestrated political hit, fueled with apparent pent-up anger about President Trump and the 2016 election, fear that has been unfairly stoked about my judicial record, revenge on behalf of the Clintons, and millions of dollars in money from outside left-wing opposition groups.”