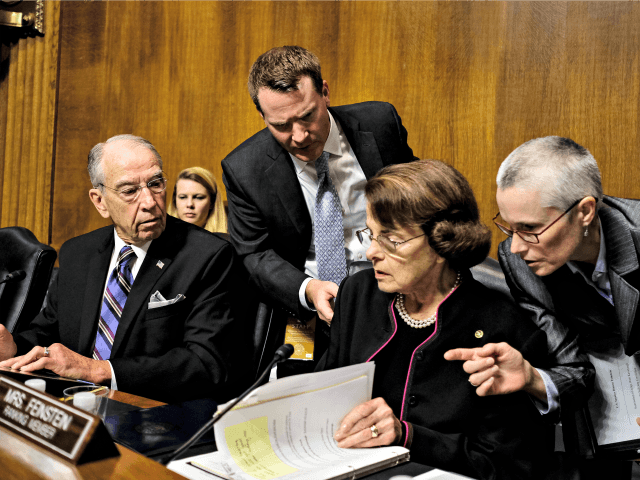 “Dr. Ford, in choosing attorneys, did anyone help you with the choice?” Rachel Mitchell, the Phoenix, Arizona, special victims division chief enlisted as outside counsel to take Ford’s testimony, asked.

“Various people referred me to lawyers that they knew in the Washington, DC-area,” Ford responded. “I asked some family members and friends and they referred me to like divorce attorneys that might know somebody … I ended up interviewing several law firms from the DC-area.”

Unsatisfied with that answer, Mitchell pressed Ford to answer if anyone other than friends and family helped her choose a lawyer.

“Um, I think that the staff of Diane Feinstein’s office suggested the possibility of some attorneys,” Ford replied, without saying what effect that advice may have had.

“Including the two that are sitting on either side of you?” Mitchell asked, to which Ford replied, “Not both of them, no.”

Mitchell asked for clarification of these indefinite answers in her next five minute questioning session. “Which of your two lawyers did Senator Feinstein’s office recommend?”

Katz has been a fixture of left-wing advocacy for decades, being enlisted to defend both President Bill Clinton and Sen. Al Franken (D-MN) from their own sexual misconduct allegations.

The origin of Ford’s selection of her other present attorney, Michael Bromwich, the Justice Department Inspector General for the bulk of the Clinton administration, was not addressed.

Earlier in the hearing, Sen. Mazie Hirono (D-HI) asked Ford if there was a “political motivation” in her coming forward with an alleged attack from 36 years ago on the eve of Kavanaugh’s potential elevation to the Supreme Court.

“No. I’d like to reiterate that — again — I was trying to get the information to you while there was still a list of other — what looked like equally-qualified candidates,” was Ford’s response.