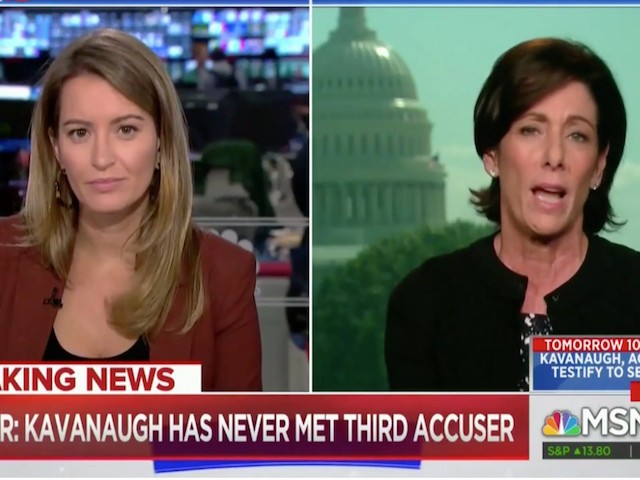 TUR: These latest rounds are extraordinarily serious. Your client says he doesn’t know Mrs. Swetnick. He calls the allegations ridiculous and from the twilight zone. Is your client 100% confident he’s never met her?

WILKINSON: He doesn’t know her. He’s never met her. We had people calling our office saying they don’t know her. They’ve never seen her at the parties that they attended with him. When you think about the allegations, they are alleging that for years there were gang rapes going on with multiple men, multiple women being victims. That’s such a frightening allegation. I don’t understand how her lawyer didn’t go immediately to the police, and back then why people wouldn’t have said something. We understand why women don’t generally report sexual assault and they often don’t talk about it for a long time, but this a quantum leap different. This is a frightening allegation that there were groups of boys with groups of girls over two years involved in drinking, drugs and gang rape. And no one ever went to the police, no one has gone to the police to this day to report those allegations? It’s truly outrageous.

TUR: Are you calling her a liar?

WILKINSON: I’m not calling her a liar. I think she has known about this for a while, supposedly, and so has Mr. Avenatti. He waved this on some of your programs since last weekend and said he knew about it and he never went to the police. As an attorney, I know what my obligation is. It’s to my client. And if I had represented her, it would have been my duty to go to the police immediately and report this. If this is true, it is a horrible thing. There’s nothing that could have stopped Mr. Avenatti from going to the FBI or the police to start an investigation on his own. As far as I can tell from reading this, that wasn’t done.

TUR: All the women who have accused your client of misconduct have one similar thing in common. They all say he drank to excess. There are other folks out there from his high school years and from his college years who say the same thing, he drank to excess. Your client also admits he did at some times have a few too many beers. If that’s the case and if there’s a potential out there for him being black out drunk or very drunk, how is he confident of his memories?

WILKINSON: First of all, almost every high school and college student could be accused of the same thing or have done, had drinks, had too many drinks. That’s not the same as being black out drunk and not remembering this. He knows that he didn’t know this woman. She’s not saying it’s once. She’s saying it’s over two years. This wasn’t a one time thing. That’s the same with the other two women. All the people who are supposedly there in those instances have said it didn’t happen or they don’t have any recollection. There’s not one person who is saying they were there. In each of the incidents there’s groups of people that were identified as present. That’s not typical in these allegations. Normally it’s one man and one woman and it’s hard to determine. Here, especially in the most recent outrageous allegation, there’s scores of people involved for years.

TUR: Why is your client not demanding an FBI investigation to get to the bottom of this?

WILKINSON: He didn’t know about this until it came out today. Mr. Avenatti has had this information for weeks.

TUR: Is he now demanding an FBI investigation?

WILKINSON: He knows he didn’t do it.

TUR: Why doesn’t he want an FBI investigation? If there’s multiple people who can go on the record or go under oath or be interviewed by the FB, why would he not want the FBI to get involved?

TUR: This is a job interview. It’s two different things.

WILKINSON: It’s out here in the public opinion and what you’re doing is a perfect example. You’re claiming because he was drinking, he must have done it.

TUR: I asked you about his memory. Don’t put words in my mouth. I asked if he was confident of his memories. That’s all I asked.

WILKINSON: I heard your last session and you were saying there’s so much detail. There’s no detail in here. There’s no place. There’s one or two years generally. There’s no other people. There’s no dates. There’s no times. There’s no information. There are multiple people supposedly involved within several years, not just her. She saw other women being gang raped and it’s never been reported. I don’t know what the lawyer did and I feel sorry for her for getting dragged into this and any other woman getting dragged into it but that doesn’t mean the accusations are true. This is a horrible commentary on our process this is what we’re putting people through who wants to be in public service. It’s important to treat everybody in the process with dignity and giving them the presumption of innocence whether you’re inside a courtroom or outside.

WILKINSON:  My client knows that he didn’t do this. He’s not speculating about all those things. What he knows is all of his friends and family all say this isn’t like him. Nobody corroborates one of these allegations that they saw this happen or were in the room. Even the lady who knows Dr. Blasey and was friendly with her and was in the same party says she’s never met Judge Kavanaugh. He’s not speculating about the politics. What he’s telling you is what he knows. He did not do this.

TUR: Does your client believe any of the accusers against the president?

WILKINSON: Does he what?

TUR: Does he believe any of the women who came out and accused the president of sexual misconduct?

WILKINSON: I don’t know what that has to do with this. I’ve never discussed that with him. We’re talking about what’s happening here. I came today to be on your program to tell you what he believes and what we know. That’s it. I’m not here to make political arguments and comment on what the president said or didn’t say. The point is someone is making these outrageous allegations about him with no detail over multiple years with multiple people and he’s telling you he did none of it. He doesn’t know her. I’ve had people call me and email me saying they know him. They’ve never met her. They’ve never seen her and never heard of any of these allegations. I’ve got to believe if this was happening over two years someone else would have heard about it and reported it. Not the day before the hearing. He’s had an entire hearing, a background investigation, none of these people, including Mr. Avenatti’s client, came forward until the day before the hearing.

TUR: Does he believe Dr. Ford is lying?

WILKINSON: He doesn’t believe anyone is lying or not lying. All he can say is what he knows. He did not do this. He’s never engaged in that behavior. He was a normal kid. He played sports. He was a good student. He drank beers and sometimes he said things he regrets and cringes at, like all of us. But that is very different than saying did you engage in a sexual assault. Absolutely not. He did not do that.