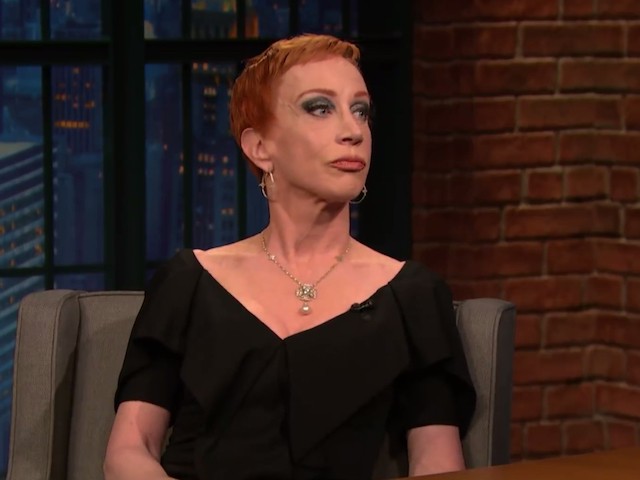 D-list comedian Kathy Griffin, in her eternal quest for relevance, has made it clear that she will not be intimidated by mail bombings, even though she has not been targeted.

Kathy Griffin told The Wrap, “For the past three years, many people have warned that the rhetoric coming from Donald Trump would end up encouraging the kind of conduct we’ve seen in the past 48 hours with prominent politicians and former top officials receiving pipe bombs in the mail.”

The 57-year-old said that she had “seen first hand the kind of hate and threats the president and his family can gin up with their statements and tweets. I will not be intimidated by them or anyone else.”

Griffin’s statement is puzzling because she was not in fact targeted by any bombs.

Targets so far include Barack Obama, Bill and Hillary Clinton, numerous Democratic politicians, and a CNN office in New York.

Griffin infamously released a photo of herself holding a fake bloodied head of Donald Trump. She apologized for the incident, but has since taken her apology back and doubled down on her hateful anti-Trump rhetoric.

Fuck you, Melanie. You know damn well your husband can end this immediately…you feckless complicit piece of shit. https://t.co/5NsoFgMuLr

Griffin also said that she thought the standard for jokes about the president had changed under Trump.

“I don’t mean to disrespect the presidency. I’ve been to the White House. I have visited. I, you know, I was doing stand-up for so long, you guys know there was a time in the Bill Clinton days you could make fun of that Monica dress all day long and nobody thought you were a terrorist but now, like, you said things have gotten not only politically incorrect but this administration and learned it firsthand because I got a call the next day from the Department of Justice and I was under a two-month federal investigation for conspiracy to assassinate the president of the United States,” she said.