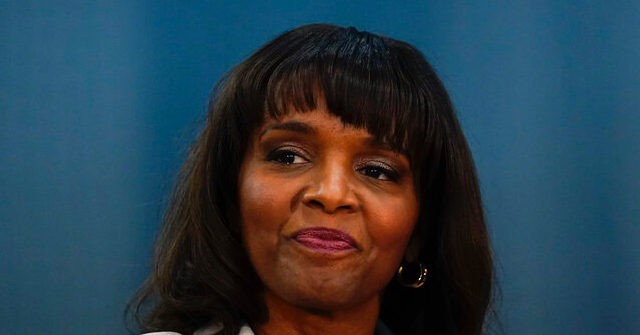 Pennsylvania U.S. Senate Candidate Kathy Barnette (R) denied tweeting “Pedophilia is a Cornerstone of Islam” during an interview with MSNBC on Thursday, despite the existence of such a post on her blue checkmark account.

“Yeah, no, I don’t think that’s me,” Barnette replied when NBC’s Dasha Burns read the tweet aloud. “Okay, I would have never said that, because I don’t believe that.”

Pedophilia is a Cornerstone of Islam ⋆ UFP NEWS http://t.co/PmuXZE7h80

Republican strategist Matt Wolking, who works for one of Barnette’s competitors Dave McCormick, posted the interaction to Twitter, criticizing the senate hopeful for denying the existence of an easily-findable tweet.

“Asked about her own tweet, Kathy Barnette says “I don’t think that’s me.” This is what a dishonest train wreck looks like,” Wolking said.

Asked about her own tweet, Kathy Barnette says “I don’t think that’s me.”

This is what a dishonest train wreck looks like.

Media outlets have begun unearthing several other tweets from Barnette’s account criticizing Islam and Muslim people. CNN published a report on Friday highlighting her “anti-Muslim views” and “anti-gay comments,” likely only part of an incoming wave of scrutiny Barnette will face after largely flying under the radar for most of her campaign.

@act4america They r animals & we must stop interacting with them as if they r rational human beings. There is nothing rational about Islam.

#RashidaTlaib, a MUSLIM, said this about OUR President.

Aren’t you all so glad you voted in the first “openly” Palestinian Muslim? (Sarcasm for ya’ll who don’t get sarcasm).

Aren’t you so proud of how “tolerant”… https://t.co/TCkmK4MN6o

Barnette’s popularity skyrocketed ahead of next week’s primary after her performance in last month’s debate and a recent clip explaining her birth being the product of her mother’s rape at age 11 that went viral. Recent polls show the race is a statistical tie between Barnette, McCormick, and Mehmet Oz, who has the endorsement of former President Donald Trump.

However, her quick rise has many in her own party voicing concerns about a lack of vetting before the GOP primary on May 17 — including Trump.

“Kathy Barnette will never be able to win the General Election against the Radical Left Democrats,” Trump said in a statement on Thursday.

Trump alluded to the controversy over her military service, noting Barnette has “many things in her past which have not been properly explained or vetted.”

“I believe that Mehmet Oz will be the one most able to win the General Election against a Radical Left Democrat looking to do unthinkable harm to our Country,” Trump said.

The Daily Beast reported that Democrats are already “salivating at the prospect” of facing Barnette in November, should she secure the Republican nomination.

“I’m sure many of us are hoping she sustains it and wins. Because she’s certainly — [it] would be very tough to elect her,” said T.J. Rooney, the former head of Pennsylvania’s Democrat Party.