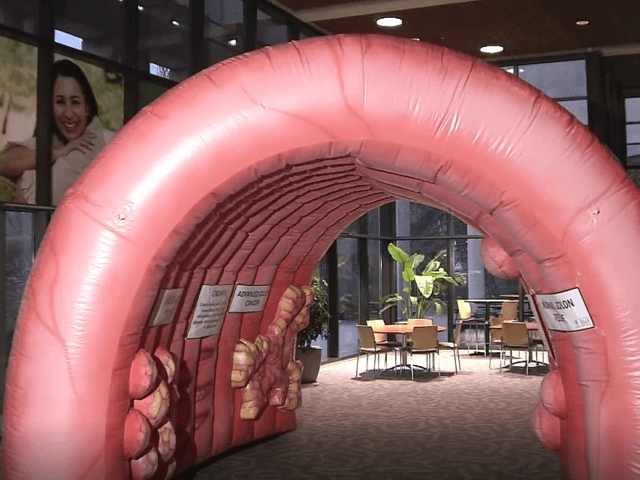 Officials with the University of Kansas Cancer Center are willing to pay good money to anyone who can locate a stolen inflatable colon.

Medical center officials announced Friday that they are offering $1,000 in reward money to anyone who can track down a large, inflatable human colon spanning ten feet and weighing 150 pounds.

Someone pilfered the inflatable human organ from the back of a pickup truck in early October. The intestine, which is valued at $4,000, had been in a Kansas City neighborhood for a walk/run event, the Kansas City Star reported.

Has anyone seen a giant colon?!? There is a $1,000 reward for it to be returned:https://t.co/NySlNGkjHk pic.twitter.com/DrKhyq4OUs

One local events coordinator for colon cancer awareness group in Kansas City thought whoever stole the blow-up colon ditched it.

“There’s not much of a black market for a giant inflatable colon,” said Stacie Moody, the events coordinator for Get Your Rear in Gear-Kansas City.

Officials are hoping the quest to find the inflatable colon can prompt people to get screened for colon cancer.

The American Society of Gastroenterology donated $1,000 to the center in the hopes someone could find it in their heart to return the blow-up colon.

“Colorectal cancer screening is the most powerful weapon we have against colorectal cancer,” said John Ashcraft, a surgical oncologist at the center. “Colon cancer is a tough subject for many to talk about and the giant, 150-pound, 10-foot-long inflatable colon is a great conversation starter.”