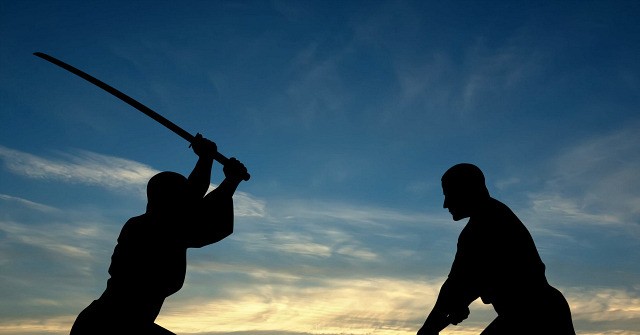 A Kansas man has requested that an Iowa court grant his motion for a “trial by combat” to settle a custody dispute with his ex-wife and her attorney on the battlefield.

David Ostrom, 40, of Paola, Kansas, has cited in court documents that his ex-wife, Bridgette Ostrom, 38, of Harlan, Iowa, has “destroyed (him) legally,” the Des Moines Register reported Monday.

The Carroll Times-Herald reported that Ostrom filed a request with the Iowa District Court in Shelby County to give him 12 weeks to source or forge Japanese swords used in battle.

“To this day, trial by combat has never been explicitly banned or restricted as a right in these United States,” Ostrom argues in court records, adding that it was used “as recently as 1818 in British Court.”

Ostrom said the motion began when he became frustrated with his ex-wife’s attorney, Matthew Hudson, saying he wanted to take the fight to “the field of battle where (he) will rend their souls from their corporal bodies.”

Hudson filed a resistance to Ostrom’s trial by combat motion by doing a little spelling check.

“Surely (Ostrom) meant ‘corporeal’ bodies which Merriam Webster defines as having, consisting of, or relating to, a physical material body,” the attorney wrote. “Although (Ostrom) and potential combatant do have souls to be rended, they respectfully request that the court not order this done.”

Hudson argued that a duel could end in one or both parties dying, which could outweigh custody and property tax issues.

“It should be noted that just because the U.S. and Iowa constitutions do not specifically prohibit battling another person with a deadly katana sword, it does prohibit a court sitting in equity from ordering same,” Hudson wrote.

The Iowa attorney also asked that the court take away Ostrom’s visitation rights and make him undergo court-ordered psychotherapy.

Ostrom later admitted to misspelling the word but argued that he did not have any mental health issues.

The court has not made a decision on either party’s motions.

In modern times, the right to trial by combat has been struck down in other courts around the world. In a 2003 case in the United Kingdom, a court ruled against a man who wished to invoke a trial by combat to settle a £25 fine for a minor motor vehicle offense, the Telegraph reported.