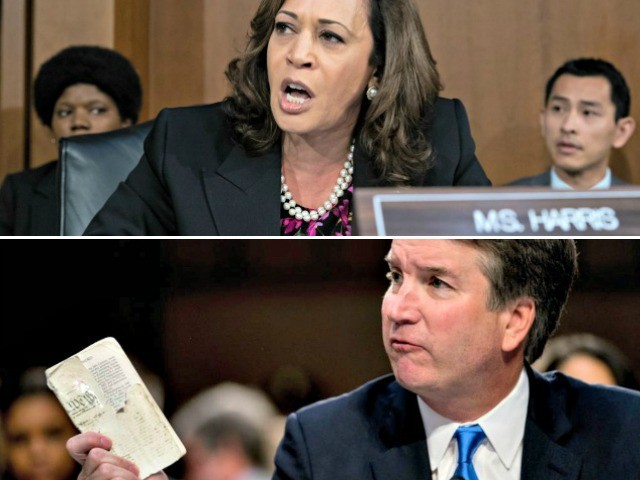 “I walked out,” Harris boasts in the fundraising appeal. “Republicans rushed Judge Kavanaugh’s confirmation with a sham hearing yesterday morning, less than 24 hours after Dr. Christine Blasey Ford had the courage to tell her story in front of the entire country. It’s a disgrace. So, instead of sitting through the farce … I walked out.”

Harris launches into a bid petitioning MoveOn.org members to “rush” contributions as little as $3 to Donnelly:

I know I’m not alone in this fight; millions of Americans are with me. And as of yesterday morning, I’m proud to say that my colleague, Indiana Senator Joe Donnelly, is with me. After hearing Dr. Blasey Ford testify and seeing the GOP effort to push through this confirmation, Sen. Donnelly has said he’ll vote no on Kavanaugh.

But Sen. Donnelly is in one of the toughest reelection fights this year—and we know his opponent, a right-wing candidate who’ll march in line with Senators McConnell and Grassley and Donald Trump—will attack him for this vote. That’s why I’m asking:

Can MoveOn members around the country help in getting Joe’s back?

Click here to rush a contribution of $3 to Joe Donnelly to help have his back and end Republican control of the Senate in November.

The hyperlink in the email takes subscribers to a MoveOn.org contribution page at ActBlue, the online fundraising giant used by Democrats and progressive groups.

MoveOn.org has been massively backed by billionaire George Soros. It has also been financed by the Tides Foundation, a leftwing sponsorship organization that has itself received donations from Soros and has partnered with Soros’s Open Society Foundations.

MoveOn.org has taken center stage in opposing Kavanaugh, leading a #StopKavanaugh campaign aimed at mobilizing supporters to call their senators in opposition to Kavanaugh’s nomination.

“Call your senator and tell them to #StopKavanaugh,” MoveOn.org demands. “Brett Kavanaugh could gut or overturn Roe v. Wade and the Affordable Care Act, can’t be counted on to hold Trump accountable for any criminal activity, and has repeatedly sided with corporations and the wealthy over workers and protecting our environment.”

“What we’re looking to do right now is to find ways to carry the energy, especially in what’s transpired in the last 18 hours,” Erica Mauter, campaign director at MoveOn.org, told Politico. “Phone calls are important, but actually showing up…you feel other people’s energy, it’s not just you.”