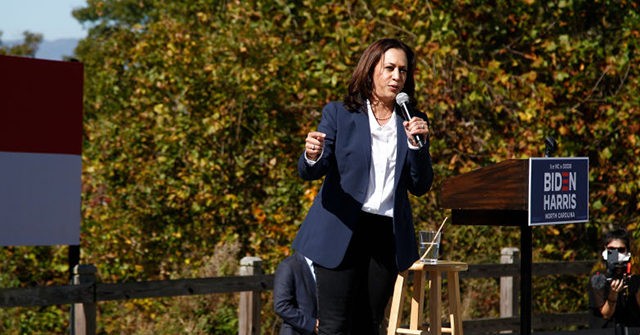 Sen. Kamala Harris (D-CA) attempted to provide a contrast between President Trump and Joe Biden (D) during a Wednesday campaign stop in Asheville, North Carolina, warning supporters that Trump consistently rejects science, specifically on the Chinese coronavirus and the “issue of this climate crisis,” which she said is “threatening our very existence.”

“And on the other hand, you have a Joe Biden, who embraces science, who will be a leader who says that the public health experts must guide the policy decision we make on all of these issues that literally threaten the health and well-being of the American people,” she continued, failing to explain Biden’s rejection of the Green New Deal, which occurred during the first presidential debate.

Notably, NBC’s Kristen Welker, who is moderating the final presidential debate, initially listed climate change as a topic despite expectations of the event focusing on foreign policy.

During the speech, Harris described the Chinese coronavirus pandemic as an “accelerator” in that “it has highlighted what was wrong before and has made it worse.” Speaking to the group in what she described as a parking lot, the vice presidential hopeful accused Trump and his administration of covering up crucial information on the virus early in the year.

Harris’s stump speech was reminiscent of the speech she delivered in Orlando, Florida, on Monday, repeating her claim that Trump has a “weird obsession” with trying to undo the Obama-Biden legacy.

“And in the midst of all this, the public health crisis, you’ve got Donald Trump and his boy Bill Barr in United States Supreme Court — this is stranger than fiction. Have you ever heard that expression? Fact is stranger than fiction? We’re living it. We’re living it, sister — trying to get rid of the Affordable Care Act that President Obama and Vice President Biden made happen.”

“He’s got this weird obsession with wanting to get rid of whatever President Obama and Vice President Biden created. It’s just this obsession right?” she said of Trump.

Harris, a member of the Senate Judiciary Committee, also blasted the confirmation process for Supreme Court nominee Amy Coney Barrett, referring to it as an “illegitimate process”:

The vice presidential hopeful told North Carolina voters that she believes the outcome of the race “in very many ways” will come down to voters in North Carolina, emphasizing that their decisions will affect Americans nationwide.

Harris will also visit Charlotte on Wednesday. Trump is also appearing in the battleground state, holding a rally in Gastonia in the evening.