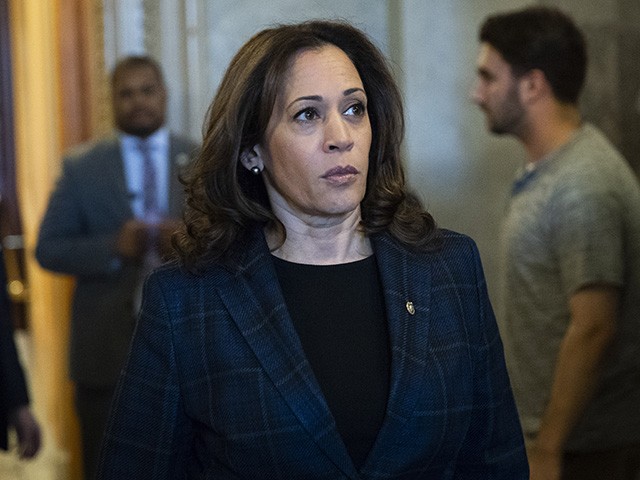 A San Diego building housing an office for Sen. Kamala Harris and the San Diego Union-Tribune was evacuated Wednesday after a suspicious package was found.

The packages were discovered atop a trash can outside the newspaper’s office, San Diego police Officer Billy Hernandez told reporters. The paper’s immigration reporter Kate Morrissey shared a photo of the packages to social media following the evacuation. A press representative for Harris has yet to issue a statement on the incident.

Suspicious package outside the @sdut building this morning. #journalism pic.twitter.com/KV7ovOEW5f

The entire block around the building where The San Diego Union-Tribune is in downtown San Diego is roped off and I saw people were evacuated from the building. More info when we can get it. pic.twitter.com/6i1LuPlMJc

Former President Bill Clinton was at the family’s Chappaqua, New York, home when the package was intercepted at a Westchester County facility.

The Secret Service says the package was identified during routine mail screening procedures and the Clintons weren’t at risk of receiving it.

In addition, CNN’s headquarters in Manhattan was evacuated due to the discovery of a suspicious package. Multiple sources told the news network that the package was addressed to former CIA Director and MSNBC contributor John Brennan.

Law enforcement officials say the CNN package was discovered in the mail room. It is not clear yet if this incident is possibly related to the other packages. Further, NBC’s Pete Williams reports that the Secret Service intercepted another suspicious package addressed to former Attorney General Eric Holder.

The White House condemned the attempted attacks, issuing the following statement: “These terrorizing acts are despicable, and anyone responsible will be held accountable to the fullest extent of the law. The United States Secret Service and other law enforcement agencies are investigating and will take all appropriate actions to protect anyone threatened by these cowards.”